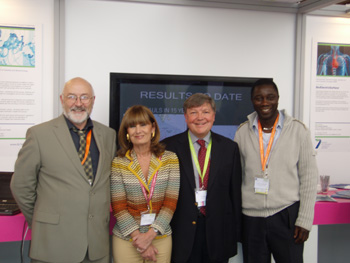 “When marine territories are taken into account, over 50% of Europe can be said to lie underwater.”

This was the message from Ireland’s Marine Institute to delegates of the recent Czech-EU Presidency “Research Connections 2009” Conference in Prague on 7th – 8th May.

Research Connections 2009 provided an opportunity to highlight Ireland’s research capabilities and forge international partnerships.   Ireland was represented at the Conference Exhibition by a stand entitled “Ireland: A land of Research, Innovation and Culture” which was hosted by the Irish FP7 Support Office (Enterprise Ireland).

The key messages emerging from the Commission at the conference were that:

All of which are consistent with the approach being adopted by the Sea Change strategy, which is to use Irish research investments to leverage additional funds from European programmes, with some success.

During the period 2007-2008, Irish marine researchers have been awarded over €9m in competitive research funding through participation in 22 projects approved under the first two rounds of the 7th Framework Programme (FP7). The INTERREG-IV Programmes, meanwhile, have yielded a further €4.5m in competitive European Regional Development Funding (ERDF) for marine projects.

Ireland leads three of the current suite of FP7 projects:

Preliminary indications are that a further 8 EU projects are in the pipeline, worth over €3.6 million in grant-aid. Thus, Ireland is well on course to meet its targets for international marine research funding as set down by the Sea Change Strategy and the Ireland’s overall Strategy for Science, Technology and Innovation (SSTI).

The Commission estimated an attendance of circa 1,500 participants at the Research Connections Conference which was opened by Commissioner Janez Potočnik (DG Research) and Ondřej Liška (Czech Minister for Education).