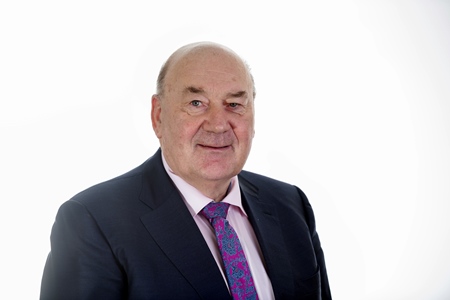 Announcing the appointment, the Minister thanked Dr Killeen for his valuable contribution over the past five years and said; "I am pleased that John has accepted this re-appointment as he has the essential experience and knowledge necessary to continue to lead the Board of the Marine Institute and ensure it has the necessary skills to deliver on its key role as the national agency for marine research, technology, development and innovation".

Dr John Killeen is an engineer by profession and a native of Co Roscommon, he became an Honorary Freeman of Galway City in 2012. During a long and diverse career, he has worked on significant Local Government projects and worked with large engineering firms internationally. Dr Killeen was President of Engineers Ireland from 1995-1996 and founding President of the Academy of Engineering in Ireland in 1996-1998. He received an outstanding Lifetime Award for his contribution to Irish Engineering in 2013. He is a retired CEO of Colas Group in Ireland and a retired managing director of Cold Chon Galway Ltd. Dr Killeen was appointed to the West Northwest Hospital Group Board in 2013 and is currently the Chair of the Saolta University Healthcare Group. In 2009 he was chairman of the Volvo Ocean Race event in Galway and in 2012 was president of the Volvo Ocean Race finale and festival. Dr Killeen is also President of the Timoney Leadership Institute - a charity which promotes International leadership training for Irish CEO's in conjunction with IESE University, Barcelona and visiting professors from Harvard, Notre Dame and IPADE. He is also currently serving on the UK and Irish Councils of the RNLI.