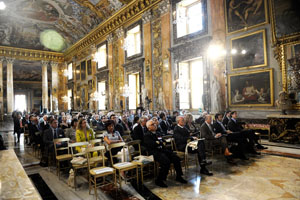 “Sustainable development of Europe’s extensive marine and maritime resources is a keystone of the European Economic Recovery Plan,” according to the President of the European Commission, José Manuel Barroso, who was speaking at the 2nd European Maritime Stakeholder Conference in Rome recently, to celebrate and report on progress in the implementation of the Integrated Maritime Policy for the European Union and its supporting Action Plan (otherwise known as “The Blue Book”).

According to Mr Barroso, such a strategy represents "a unique opportunity for Europe to be at the forefront of the next wave of maritime developments supported by the knowledge economy" (Lisbon Agenda).

“As an island economy, Ireland has a very strong interest in these developments,” said Yvonne Shields – Director of Strategic Planning and Development Services at the Marine Institute. “Ireland has had a significant input to the science pillar of the Maritime Policy, the European Strategy for Marine and Maritime Research (September 2008), through the development and implementation of Sea Change (A Marine Knowledge, Research and Innovation Strategy for Ireland 2007 – 2013) which is co-ordinated by Marine Institute.

The 2nd European Maritime Stakeholder Conference, which was held Rome from 18th – 20th May, was hosted by the Italian government, and held in Rome’s magnificent Palazzo Colonna. The Conference was attended by over 1,500 participants including many Ministers and Senior Policy Advisors from European Member and Associated States.

EU Commissioner for Maritime Affairs and Fisheries (DG MARE) Joe Borg, who also addressed the Conference, listed the progress being made in an impressive number of important areas, including:

A full report on progress is currently being compiled (October 2009) for presentation to the European Council and the European Parliament.

Commissioner Borg also emphasised the importance of the active engagement of stakeholders, including Member State governments and citizens in the Integrated Maritime Policy  process. He expressed great satisfaction with the engagement of the various Commission Directorates and a growing satisfaction with the number of Member and Associated States now establishing Inter-Ministerial Committees to actively engage in the Member State Expert Group on Maritime Policy and the Presidency High Level Focal Points Group on Maritime Policy.

Other important messages coming from the event included:

The Integrated Maritime Policy of the EU recognises the importance of regional development and the fact that “one size does not fit all”. Accordingly, strategies and pilot initiatives are based on sea basins (e.g. the Atlantic, the Baltic, the Black Sea, etc).

Currently a strategy has been developed for the Arctic Ocean, and the Baltic Sea Strategy will be launched during the Swedish-EU Presidency (July—December 2009). A Mediterranean Strategy is under active development including the input from North African countries.

So far  work has not yet commenced on a strategy for the Atlantic.

This provides a unique opportunity for Ireland to contribute to and influence the European Strategy for the Atlantic and ensure that issues of critical importance to Ireland are appropriately addressed (such as reform of the CFP, aquaculture, climate change, renewable ocean energy, etc.).

Considerable emphasis was put on the importance and challenges posed by the implementation of the Marine Strategy Framework Directive by Member States. Linked to this were the challenges of defining indicators of Good Environmental Status (GES) and the positive benefits of implementing maritime spatial planning as a tool for sustainable development. A series of Workshops on Maritime Spatial Planning and pilot studies are planned.

In September 2008, the Commission published the European Strategy for Marine & Maritime Research (ESMMR, 2008). This was one of the key action points identified in the IMP-EU and was greatly influenced by the Galway (2004) and Aberdeen (2007) Declarations. Currently:

In emphasising the central role of science and technology in economic development, the ESMMR is very compatible with, and complementary to, the strategy set out by the Irish Government in the National Strategy for Science, Technology and Innovation (2006-2013) and further developed in the National Marine Research Strategy Sea Change.

In parallel with Sea Change, the European Strategy for Marine and Maritime Research:

At the closing session, Spain announced that it would host the 3rd European Maritime Stakeholder Conference in May 2010 during the Spanish-EU Presidency.

Future EU-Presidencies: Sweden (2009), Spain (2010) and Belgium (2010) are committed to the IMP-EU and have indicated their intention to host a number of key maritime policy meetings during their presidencies.

A full programme of events, including Commissioner Borg’s opening and closing address, and conclusions of the 15 supporting Workshops are available on the DG MARE website: