The latest analysis of 2009 shipping traffic data published by the Irish Maritime Development Office (IMDO) indicates that the rate of decline of shipping on the island of Ireland eased during the 1st half of 2009. However the overall volume of traffic handled at ports on the island continued to decline over the first 6 months of 2009 compared to the same period in 2008.

Following a peak in traffic volumes in all shipping sectors through Irish ports during 2007 a steady decline took place with significant volume corrections occurring in the market in line with the general downturn in both the domestic and global economies. IMDO’s latest data indicates that between January and March this year, 4 of the 5 key shipping market segments have recorded their lowest levels of volume demand for the last 30 months. Since March 09 the majority of sectors, with the exception of dry bulk, have seen small positive monthly increases in volumes shipped. In spite of this recent recovery, shipping volumes remain significantly depressed compared to 2007 peak levels. 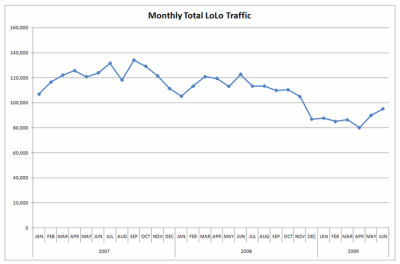 1st half 2009 lift-on/lift-off (lo/lo) traffic fell 24% on the same period in 2008, with a total of 525,874 TEU handled at all Irish and Northern Irish ports over the 6 month period.  Underlying weakness in consumer demand in the ROI contributed to a 30% decline in laden imports of container traffic (in particular from Asia) while, despite difficult external market conditions, Irish export laden traffic declined by only -11% over the same period. Lo/Lo container volumes increased by 6% between May to June, with the largest growth being recorded via Northern Irish shipping corridors. 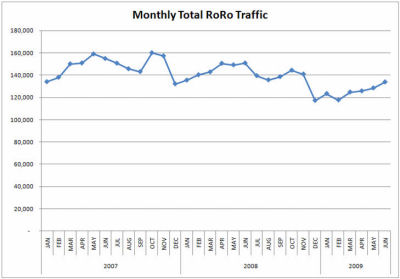 Roll-on/Roll-off (ro/ro) Ferry traffic, which is traditionally heavily weighted in traffic movement to the UK and Continent, fell 13% when measured on an all island basis in the first half of 2009 compared to the same period in 2008.  753,845 freight units were handled at all Irish ports compared to 869,146 for the 1st half of 2008 . Latest data indicates that the volume of traffic bottomed out in February this year with 117,600 units being shipped. Since this period volumes have increased slowly with a 4% month on month increase recorded between May to June. Ro/Ro traffic on the southern continental corridor increased by 48% for the 1st 6 months from 11,610 to 17,164 units. 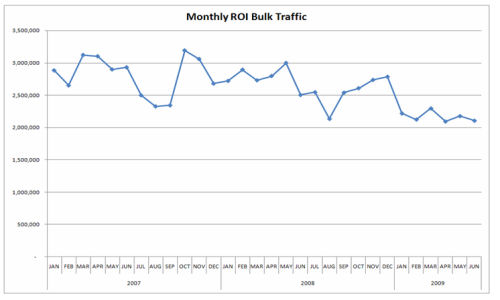