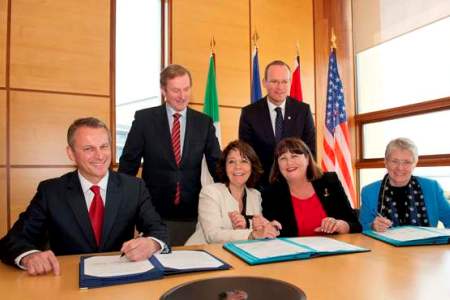 The objective of this event was to provide a vision for enhanced cooperation on both sides of the Atlantic and a set of jointly agreed priority actions to provide the means to achieve these goals.

Marine scientists from the United States of America, Canada and Europe gathered in Galway (Ireland) to identify the key scientific and societal challenges that need to be addressed in order to deliver (by 2020) a predictive capacity [both short term predictions and long term forecasts] for the major risks and changes in the dynamics of the North Atlantic.

The report from the workshop held on the 23rd of May is availble to download: Galway Scientific Workshop Report: The Atlantic - A Shared Resource (PDF 536KB)

The 'Galway Statement on Atlantic Ocean Cooperation' was signed by representatives of the European Union, the United States and Canada who have agreed to join forces on Atlantic Ocean Research. The goal is to better understand the Atlantic Ocean and promote the sustainable management of its resources. The Agreement aims to connect the ocean observation efforts of the three partners. The work will also study the interplay of the Atlantic Ocean with the Arctic Ocean, particularly in relation to climate change.

Mr Simon Coveney T.D., the Irish Minister for Agriculture, Food and the Marine

Representatives from the United States of America

Further details of the Atlantic Action Plan (2014-2020) were outlined by Commissioner Damanaki at the Irish-EU Presidency Event “The Atlantic – A Shared Resource”.

This conference was organised jointly by:

• The Marine Institute (Ireland) on behalf of the Irish Presidency and

The hashtag for the event was #atlanticresearch

Photographs of the event are available from the Marine Institute Communications office.  View a collage of the The Atlantic - A Shared Resource photographs.

EU Maritime Strategy for the Atlantic