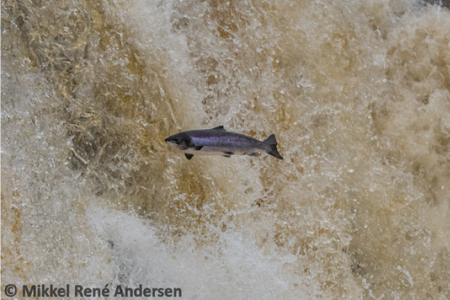 21 October 2020 - The deliberate introduction of captive-bred salmon into the wild is a common management response to natural or human-driven declines in salmon numbers. It is also sometimes done to increase the numbers of fish available for angling. On the face of it, introductions appear to be a good idea: wild salmon have very low survival rates as juveniles in the river (as low as 0.3%) due to natural limits of the ecosystem such as competition, predators, and food scarcity, whereas salmon bred in a protected hatchery environment can be expected to survive there at much higher rates, allowing large numbers to be moved to the wild at a suitable stage.

Earlier studies of Atlantic salmon had indicated that captive-bred fish or their offspring might perform less well in the wild, but evidence across the full life cycle has thus far been lacking. New research led by scientists at University College Cork has now demonstrated, using genetic fingerprinting techniques, that captive-born salmon had as little as one third of the lifetime reproductive success as wild salmon spawning in the same river. Moreover, the overall productivity of the mixed population was much lower in years where captive-bred fish comprised a greater fraction of potential spawners.

"We looked at the lifetime reproductive success of salmon spawning naturally in the wild. So for each adult fish that returned to the river from the sea, we counted up the total number of offspring they produced across their lives that themselves survived to spawning age," says co-lead author Ronan O'Sullivan of the UCC School of BEES and the Environmental Research Institute. "We used a genetic pedigree coupled with four decades of salmon data from the Marine Institute's research facility on the Burrishoole catchment. The results show that captive-bred fish that are deliberately or inadvertently introduced into the wild contribute fewer offspring to the next generation than wild fish, and therefore are not a substitute for natural wild spawners. Thus, they do not enhance the conservation status of naturally self-sustaining salmon populations".

Dr Paul Connolly, CEO of the Marine Institute of Ireland, adds: "We welcome the use of Marine Institute data to answer a question of international significance that is relevant to conservation efforts for the culturally iconic Atlantic salmon. This analysis underlines the importance of having long–term biological data to allow management decisions to be based on the best available scientific evidence".

Further research is needed to work out exactly what is happening when the wild and captive salmon mix, but the research team suspects that hybrid offspring produced by matings between captive and wild parents are genetically less well-equipped to deal with life in the river. If true, this means that the widespread release of captive animals into the wild might actually do more harm than good in many cases.

The research team comprised an international group of collaborators based at University College Cork, the Marine Institute, Queen's University Belfast, the University of Helsinki and the University of Edinburgh. Their research findings are published in the prestigious journal Proceedings of the Royal Society B.

The research was funded by Science Foundation Ireland, the European Research Council, the Marine Institute of Ireland, the Academy of Finland and the Department for the Economy, Northern Ireland.