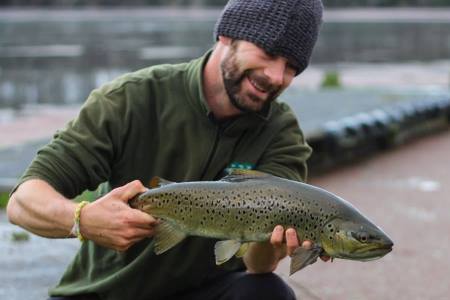 What is your area of research?
My research was aimed at furthering our understanding of migratory behaviour and performance of salmonids during key periods of their life histories. This work relied heavily on the use of passive integrated transponder (PIT) telemetry to track the movement of fish within flood-prone freshwater habitats. In order to facilitate data collection, I developed a new design of PIT antenna that is capable of being operated in volatile river systems.

The annual timing of movements between distinct habitats can be crucial for migratory species, particularly in seasonal environments with narrow ecological windows of opportunity. I characterised seasonal, daily and diel movement patterns in adult brown trout (Salmo trutta) between a lake feeding habitat and two spawning streams using passive integrated transponder (PIT) telemetry. Across two years in both streams, movements were overwhelmingly nocturnal and exhibited distinct seasonality, with a peak in daily detections close to the winter solstice. In both streams, seasonal movement activity of males began and peaked before that of females. Daily detection probabilities for both sexes increased as the moon waned (decreasing lunar illumination) and as river depth increased, the latter being associated with reduced water clarity. These findings are consistent with fish favouring movement between fluvial and lacustrine habitats when light (both solar and lunar) or hydrological conditions decrease their exposure to visually-oriented predators, and further our understanding of the proximate and ultimate drivers of salmonid migratory phenology.

The transition from freshwater into saltwater is a particularly stressful period for Atlantic salmon as they are forced to adapt to sudden changes in salinity, feeding opportunities, and predator interactions. Any pre-existing factor that increases stress or interferes with physiological processes such as osmoregulation during this period may compromise long-term survival at sea. Against this background, I also investigated the effect of internal parasites and on the osmoregulatory performance and stress levels of juvenile salmon as they first enter the marine environment.

Both Atlantic salmon and brown trout are well known for their ability to 'home' back to the natal river in which they were spawned in order to reproduce. This behaviour allows genetically distinct populations to develop which are specifically adapted to conditions associated their native river. A final component of my PhD research examined the migratory behaviour of lake-dwelling brown trout during the spawning period and related this behaviour to patterns of gene flow between inflowing and outflowing rivers. Our results revealed how a combination of telemetry and genetics can identify distinct reproductive behaviours and associated asymmetries in natal dispersal that produce subtle, but nonetheless biologically relevant, population structuring at microgeographic scales.

While migration has been a fundamental component in the long term success of both Atlantic salmon and brown trout, allowing these charismatic species to take advantage of differing opportunities represented by different habitat types at various stages of their life cycles, migration itself is energetically demanding and fraught with danger. Mortality rates of salmonid populations often spike during migration as individuals are exposed to novel environmental conditions and predators. I am currently investigating how the environmental conditions within the freshwater environment influence the onset timing, speed and duration of salmon smolt migrations, and what the implications of variation in this migratory phenology are for survival rates and, ultimately, population performance.

Why is your research important to Ireland's marine sector?
The Atlantic salmon is a culturally and economically important species in Ireland that has experienced a severe decline in numbers over recent decades. A large proportion of my research is focused on understanding the factors that influence or reduce the performance of Atlantic salmon populations, a prerequisite for the development of strategies for the successful management of the species.

What has been the benefit of being part of the Marine Institute's Cullen Scholarship Programme?
The programme has allowed me to work in Marine Institute's Newport Research Facility in the Burrishoole Catchment, which is a national index site for research on salmon and brown trout. The combination of a unique and complex river system, heavily research-oriented infrastructure and an experienced team of researchers and technicians, makes this a fantastic location for studying salmonid ecology.

What have been some of the memorable experiences during your Cullen Scholarship?
The most challenging and enjoyable aspect of my research has been the fieldwork. When the weather is good there's no better place to be than beside a river on the west coast of Ireland installing or maintaining some electronic equipment. When a storm blows in from the Atlantic though – it can be different story!

Editor's Notes:
The Cullen Scholarship Programme has provided grant aid to the value of €3 million supporting 31 PhD and three MSc students from 2014 to 2020. The research addresses a number of the 15 research themes identified in the National Marine Research & Innovation Strategy 2017-2021. This scheme is funded by the Marine Institute under the Marine Research Programme with the support of the Irish Government.