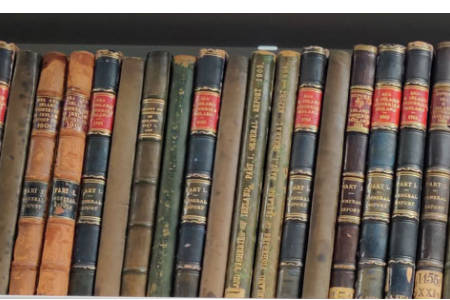 The Interactive Marine Archive includes two collections, the Sea and Inland Fisheries reports from 1839-1987, and the Scientific Investigations collection which spans from 1901-1926. The Sea and Inland Fisheries Scientific Reports consists of books published yearly, including important baseline fisheries data collected in Ireland from 1852 to 1987. This data show what fish were being taken from our seas, where they were landed and their values at market. It also covers any novel information for the years, for example boat licenses and other exceptional industry news. There are records on annual fish catches per port and gear type for about 100 years, including information about the species and weight of fish caught, the type of boats and even who was working on the boats at the time.

The Scientific Investigation time series (1901-1926) contains papers and journal articles of new scientific discoveries. Learn about how Maude Delap closed the life cycle of the jellyfish or the deep-sea documentations of Anne Massey.

"These reports contain valuable data about the pre-exploitation state of Irish fisheries," said Stephanie Ronan, Librarian at the Marine Institute. "Digitising these historical books, and extracting key information enables these data to be visualised and explored, making them easily and widely accessible to researchers and the public today," Stephanie added.

"It is only in examining the past, and beginning our journey of discovery with the appropriate baseline data, that we can offer advice on the impacts of climate change and fishing to government. For example, the work done a hundred years ago on the herring fisheries in Ireland - which yielded tens of thousands of tonnes annually, while today the yields are in the mere hundreds of tonnes - shows the impacts that climatic changes had even then," said Dr Maurice Clarke, Marine Ecosystems Lead at the Marine Institute.

Travel through 150 years of Irish fisheries history with the interactive timeline, and see some of the highlights for each year from the Sea and Inland Fisheries reports and Scientific Investigations series.

The Habitat Map displays the location of Oyster Beds licenses granted in 1875 throughout Ireland. Select a location and find out where the license was granted, to whom, when, and the area of the beds in acres, roods and perches. The Interactive Marine Archive also includes annual landing data for species such as cod, haddock and salmon.

Explore the work and achievements of many of the key scientists in Ireland, such as Ernest Holt, George Farran, Arthur Went to the Marine Institute's John Molloy (1940). Find out more about the vessels that supported our Irish fisheries research throughout the years. From the 'Helga', a steam liner of 150 feet, used in 1901 to the Marine Institute's modern RV Celtic Explorer and RV Celtic Voyager, used by scientists today.

This project was funded under the European Maritime Fisheries Fund Marine Biodiversity Scheme.