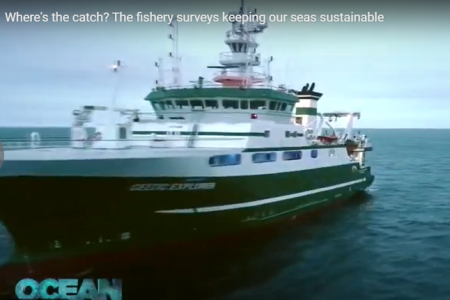 The short documentary 'Where's the catch? The fishery surveys keeping our seas sustainable' highlights the work of Marine Institute scientists during the annual Irish Groundfish Survey on Ireland's national research vessel, RV Celtic Explorer. This six-week fisheries survey in Ireland's Atlantic shelf takes place each year, with the survey passing through 170 points on the nautical chart.

The Irish Groundfish Survey assesses commercially exploited fish stocks, such as haddock and whiting. The survey provides an index of the share of young fish in the stock, which in turn gives an indication of its spawning success.

In the video, David Stokes of the Marine Institute and Chief Scientist on the Irish Groundfish Survey, explains the sampling processes and the importance of this fisheries survey, and Marine Institute scientists Jennifer Doyle and Sinead O'Brien discuss what data is collected in the research vessel's laboratory.

This Irish survey is one of many conducted in a coordinated way along the northern and western coasts of the European continent. The data collected from all surveys is compiled and analysed by the intergovernmental organisation, International Council for the Exploration of the Seas (ICES).

Dr Ciaran Kelly, Director of Fisheries, Ecosystems and Advisory Services, Marine Institute said, "We are delighted for our work to be featured in this Euronews documentary, as Marine Institute scientists play a key role in carrying out assessments and developing the scientific evidence and advice at ICES. The important scientific work undertaken by our scientists is essential for supporting a sustainable ocean economy, as well as protecting and managing our marine ecosystems."

The video is part of the monthly 'Ocean' series, produced by Euronews and the European Commission, broadcasted in nine languages and available in 160 countries.

The Irish Groundfish Survey is part of Ireland's Data Collection Scheme which is carried out under Ireland's Operational Programme (OP), co-funded by the Government of Ireland and the European Maritime, Fisheries and Aquaculture Fund (EMFAF).