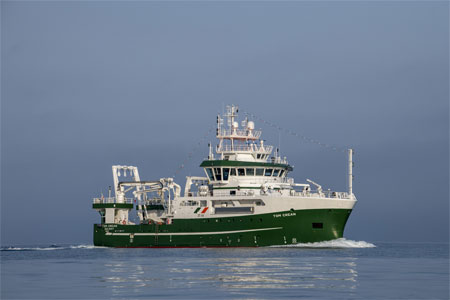 Ireland’s latest marine research vessel is named the RV Tom Crean after the legendary Irish explorer from Co Kerry, who undertook three ground-breaking expeditions to the Antarctic in the early years of the 20th Century. A special commissioning event for the marine research vessel was held in Dingle Harbour in early October 2022.

Dr Paul Connolly, CEO of the Marine Institute, spoke about his connection to the Tom Crean story on the RTÉ Nationwide programme. Dr Connolly said, “The arrival of the RV Tom Crean is a significant milestone for marine research in Ireland, and we are delighted to have the vessel featured on RTÉ Nationwide. Naming the vessel after Tom Crean gives recognition to an Irish explorer of international renown, whose life was packed with amazing feats of Antarctic bravery, determination and courage.”

The programme also includes an interview with Dr Ciaran Kelly, Director of Fisheries Ecosystems Advisory Services at the Marine Institute, about how the RV Tom Crean will be at sea for 300 days of the year, and is designed to operate in the harsh sea conditions of the Atlantic. The RV Tom Crean, alongside the RV Celtic Explorer, will survey our fish stocks and habitats to gain the best available information on the state of fish stocks in our seas.

Dr Caroline Cusack, an Ocean Climate Scientist at the Marine Institute also spoke about the importance of surveying our seas. The new state-of-the-art RV Tom Crean offers a complete offshore research platform that will play a vital role in ocean observation and enable Ireland to undertake critical research work.

The RV Tom Crean features on RTÉ Nationwide this Monday, 7th November on RTÉ One at 7pm.