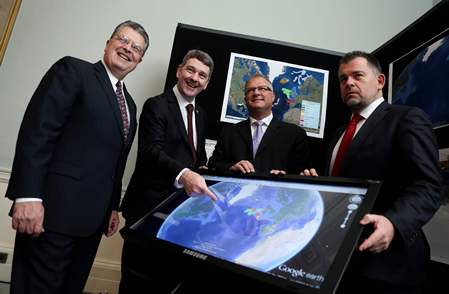 Ireland's marine researchers have won €5.5m in the latest EU Horizon 2020 competitive funding in the areas of Blue Growth and Sustainable Food and Security.

"Ireland's marine researchers are performing really well, with 12 out of 36 projects with Irish partners funded and a further 15 qualifying to be considered for funding. This shows that marine science is being carried out to the highest standards across State, third-level and SME sectors. The Government's marine strategy - Harnessing Our Ocean Wealth is paying dividends."

Irish research bodies will coordinate three significant projects. One of these projects will see the Marine Institute play a pivotal role in the implementation of the Galway Statement on Atlantic Ocean Cooperation.'

The 'Galway Statement' was signed at the Marine Institute, Galway 24 May 2013 by representatives of the European Union, the Government of Canada and the Government of the United States of America. It is a strong commitment from the EU, US and Canadian Governments to align our ocean observation efforts to improve ocean health and stewardship and promote the sustainable management of our shared marine resources.

A European Commission workshop in Dublin Castle today (Tuesday 2nd December) marks a key step in the implementation of the Galway Statement focussing on Atlantic seabed mapping. EU, US and Canadian participants are working to establish key priorities and approaches for targeted seabed mapping to support ocean observation and forecasting capabilities.

Dr Heffernan added, "It's exciting to see the Atlantic research alliance gather momentum and Ireland has much to bring to this partnership, and much to gain. We have a strong marine research community supported by growing national research infrastructure. This is in addition to our expertise in seabed mapping developed through INFOMAR, the national seabed mapping programme which the Marine Institute carries out in partnership with the Geological Survey of Ireland."

"The gains for all are clearly stated in the 'Galway Statement': " ...an Atlantic Ocean that is healthy, resilient, safe, productive, understood and treasured so as to promote the wellbeing , prosperity and security of present and future generations" ".