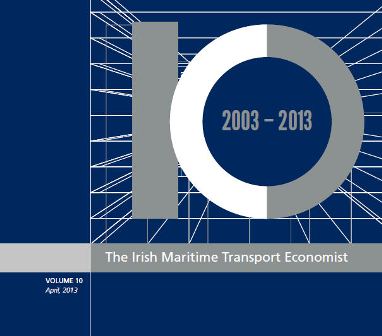 The volume of cargo shipped though Irish ports saw a small overall increase last year with two of the five principle cargo segments experiencing growth. This is according to the latest annual edition of the 10th Annual Irish Maritime Transport Economist. This year’s publication also included the launch of the IMDO’s inauguraliShip Index* which was released at an industry briefing in Dublin, today (April 24th) by the Irish Maritime Development Office (IMDO).

The new iShip Index is a quarterly weighted indicator which gauges the health of the Irish shipping industry and the wider economy. The iShip Index showed a one per cent1% increase in overall shipping activity across the State during 2012.

Speaking at the launch of the 10th publication, IMDO Director Mr. Glenn Murphy said, “Over the past decade Irish ports have handled just under half of a billion tonnes of cargo, while more than 27 million container and trailer units passed through ports on the Island of Ireland. During this time, we have seen the highest volume rises followed by record declines. Our publication clearly illustrates the relationship between the maritime economy and the real Irish economy. While not an absolute indicator in its own right, the shipping data gives us a strong impression of changes in the domestic economy; about patterns of consumption behaviour; and also indigenous export output.”

Demand over 2012 was relatively lacklustre for the Irish ports and shipping sector with growth limited to a small number of commodities in the bulk market segments. Growth in the dry bulk segment was better than expected, up overall by 7% to 14.9 million tonnes and boosted by strong input demands from the agricultural sector. This was heavily driven by a 34% increase in bulk animal feed which was in part influenced by the heavy rainfall that occurred over the summer and autumn seasons last year.

Elsewhere traffic volumes in the headline unit load shipping markets were down during 2012. Overall container traffic fell by 3% to 775,000 teu (twenty foot equivalent unit). One note of concern was the decline in exports (-2%). We initially observed an export slowdown in our 3rd quarter maritime review in 2011, with this trend persisting over the course of 2012 before turning negative in the second quarter of the year. However, exports to some longhaul markets in Asia, Africa and South America continued to show some positive signs of growth. Container imports remained negative (-3%), despite the rate of decline easing to its lowest level since 2007. The UK, our largest trading partner, returned to recession during 2012, resulting in weaker demand for the main ro/ro operators serving these markets with total volumes falling by 2% to 1.57 million freight units. Direct traffic to continental Europe, a subset of this market, increased by 5%.

Commenting on the report Minister for Transport, Tourism and Sport, Leo Varadkar TD, stated, “This year’s publication clearly articulates the challenging business environment our maritime transport sector faces, but importantly also makes the point that the worst of the economic storm appears to have passed and that we are now transitioning on a course towards more sustainable economic growth.”

The outlook for 2013 remains broadly similar to 2012 and we expect most markets to remain relatively flat for most of the year, although we are cautiously optimistic about the possibility for an upturn in some segments over the latter half of the year.

A copy of The Irish Maritime Transport Economist - Volume 10 is availble from the IMDO website.

*iShip -The inaugural iShip Index is a quarterly weighted indicator which gauges the health of the Irish shipping industry and the wider economy. The index is comprised of five separate indices, representing the main maritime traffic categories moving through ports in the Republic of Ireland: Lo-Lo, Ro-Ro, Dry Bulk, Liquid Bulk & Break Bulk.

For statistical or technical enquiries: