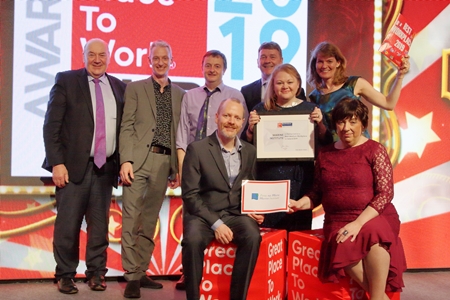 The Marine Institute; a state agency under the remit of the Department of Agriculture Food and the Marine, is delighted to announce that they have been officially recognised as one of the Best Workplaces in Ireland in 2019. The Marine Institute was officially recognised at the annual Great Place to Work Best Workplaces in Ireland awards on Wednesday 27th February. This is their first year to be named as a top Irish workplace, based on the findings of a robust employee survey and an assessment of their policies and practices by Great Place to Work Ireland.

Welcoming the announcement Dr Peter Heffernan, CEO of the Marine Institute said "I am thrilled that we have been recognised as one of the best places to work in Ireland; it is an important achievement for an organisation which strives for excellence in everything we do. Our people have always been our greatest asset. Our vision of The Marine Institute, as a global leader in ocean knowledge, empowering Ireland and its people to safeguard and harness our ocean wealth is being realised because of the hard work and dedication of our valued team members, across all areas of the organisation. I would therefore like to thank all of our employees for their individual and collective efforts, and for always aiming for excellence in the work supporting our vision, mission and each other."

The Marine Institute provides government, public agencies and the maritime industry with a range of scientific, advisory and economic development services that inform policy-making, regulation and the sustainable management and growth of Ireland's marine resources. The Institute undertakes, coordinates and promotes marine research and development, which is essential to achieving a sustainable ocean economy, protecting ecosystems and inspiring a shared understanding of the ocean. With over 236 permanent and temporary project employees who are dedicated to delivering the best scientific advice and services for the Department of Agriculture, Food and the Marine, as well as other government departments, agencies, industry and a broad range of national and international stakeholders.