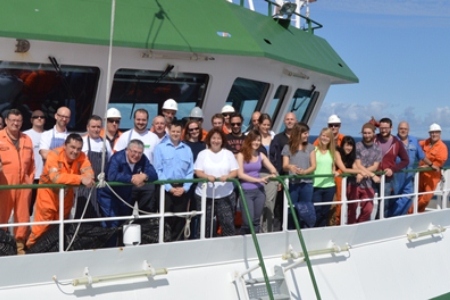 A team of thirteen scientists representing eight nationalities led by Dr Aggeliki Georgiopoulou from University College Dublin (School of Geological Sciences) and Dr Veerle Huvenne from the National Oceanography Centre, UK (Marine Geoscience), recently completed  a two week (15th – 26 July) expedition on the RV Celtic Explorer, where they made new discoveries relating to the geology and biological habitats of the south-eastern slope of Rockall Bank.

In the North Atlantic, 270 nautical miles (520 km) away from the Irish coast, the team used the remotely operated vehicle ROV Holland I and the Marine Institute’s new six metre gravity corer to gain an unprecedented look at landslide scarps of the Rockall Bank Slide Complex, as well as determine the connection between the biology, terrain characteristics and the geology of the area.

The creation of this series of deep-sea escarpments, related to the Rockall Bank Slide Complex, is believed to have taken place after the last ice age, around 15,000 years ago.  “During the expedition we discovered that the scarps in this area are actually very different from one another both geologically and biologically, which we hadn’t anticipated as they are in such close proximity to one another,” says Dr Aggeliki Georgiopoulou.

With fifty rock samples and over twenty gravity cores retrieved, the team hope to be able to explain this diversity. “We now need to further review the samples and data to help answer questions such as: do these differences in the terrain mean that this wasn’t one single landslide? Could these escarpments have formed in different episodes and that’s why they look so different? This is the first time we took such a close look at a submarine landslide so it will take us some time to analyse the video and relate what we see to what we know – this is completely new information for us. The video footage has also revealed that seafloor pinnacles evident on the Irish National Seabed Survey map are in fact volcanic edifices, so far not documented or included in the geological maps of the Irish offshore,” explained Dr Georgiopoulou.

The importance of this research lies in the fact that it helps scientists compare and understand the geologic behaviour of sediments and rock on slopes under the sea and hence establish a better understanding of the stability of our continental slope.

“The use of the new gravity corer provided scientists with an opportunity to retrieve three metre core sediments from areas under the seabed that haven’t been reached before. Also capturing footage and taking samples using the Holland I gave us an unprecedented look at the terrain. It was as if we were in the field itself, walking around and selecting exactly the samples we needed, instead of taking a blind hit in 1000 m water depth. Now we know exactly where each of our rock samples, short cores and biological samples came from,” said Dr Veerle Huvenne.

“The faulting or fracturing of the earth's surface under the sea is not as rare as people might think, but because it is not visible it is often not considered. The research of the scarps in this area will provide us with key information on the possibility of future land-slides in this region.  As this particular slope is facing Ireland, if there were a new landslide to occur, we need to estimate if it would impact the Irish west coast,” said Dr Georgiopoulou.

A second aim of the expedition was to collect material that will contribute to the mapping of Ireland's marine habitats, which is important for marine spatial planning, particularly in the context of the increasing use of deep-sea resources.

“Habitat mapping efforts so far have been unable to accurately represent areas of steep and near-vertical slopes, due to the limitations of the traditional techniques used. Traditionally, instruments only visualise and sample material straight down, directly below the ship, so vertical habitats are overlooked even though recent studies are showing they can be very rich,” explained Dr Veerle Huvenne.

Using the ROV Holland I the team of scientists retrieved nearly 50 hours of seabed video footage and up to 60 biological samples for taxonomic identification and DNA analysis.  “We also used a portable multi-beam echo-sounder, but deployed it in a totally novel configuration, that I have only tested twice before on the UK ROV Isis.  Normally a multi-beam system looks downward under a research vessel and sweeps the seafloor in stripes that are collated to make a seafloor map.  We however positioned the multi-beam on the front of the ROV Holland I, looking forward and sweeping the vertical cliffs, creating essentially maps of walls,” Dr Huvenne further said.

Aodhán FitzGerald,  the Marine Institute Research Vessel Program Coordinator thanked the ROV engineers and pilots and vessel crew and technicians for their successful configuration and deployment of the ROV, corer and other equipment, which enabled optimal sample and data acquisition.

Dr Peter Heffernan, CEO of the Marine Institute congratulated the team of scientists, highlighting the importance of using innovative new methodology and technology during the expedition saying, “this expedition is a further example of the importance of cooperation between universities, institutes and countries in researching our ocean and increasing our knowledge of its dynamic systems.”

Activities during the expedition are documented on the Marine Institute blog:scientistsatsea.blogspot.ie

This research survey CE14011 SORBEH is supported by the Marine Institute, and is funded under the Marine Research Sub-Programme by the Irish Government with a contribution from the ERC CODEMAP project.