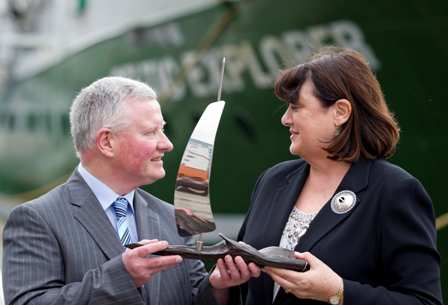 Máire Geoghegan-Quinn, Commissioner for Research Innovation and Science, presented Mr Jim Cooke with a Special Recognition of Achievement for Inspiring Students in Science on board the RV Celtic Explorer at Sir John Rogerson’s Quay, as part of the Euro Science Open Forum taking place in Dublin this week (Friday 13th July 2012).

Mr Cooke received the special recognition of achievement in light of his career-long contribution to the education of science and his demonstration of excellence and dedication as a science teacher, where he taught at Synge Street Christian Brothers School from 1971 until his retirement in 2009.

The Commissioner congratulated Jim Cooke saying, "he has captured the imaginations of generations of Synge Street students, revealing the magic of science and math, and I am delighted to have the opportunity to recognise that remarkable achievement today. Jim's track record speaks for itself – his love of science and ability to inspire has yielded well-deserved success for his students on national and international stages.   Studies tell us that an inspirational teacher is one of the most important factors in encouraging students to study STEM subjects at third level. Europe needs 1 million new researchers, and their journey into science very often begins in the classroom of an inspirational teacher".

With a special love for physics, Mr Cooke played an integrative role inspiring and guiding students to success in science. He was associated as mentor with two projects that won the BT Young Scientist Exhibition (Rónán Larkin in 2004 and Abdusalam Abubakar in 2007), three projects that achieved second place (Michael Mulhall and Francis Wasser in 2005, Gohar Abbassi in 2006 and Andrei Triffo in 2009) and many other projects achieving high placing in this competition.

Mr. Michael Minnock, Headmaster at Synge Street CBS, reiterated the sentiment of the event stating, “the legacy of Jim Cooke lies in the many students that have experienced his warmth, his passion and his overwhelming generous spirit. He is also the glue that holds our efforts together in this regard, with previous pupils having such respect for him that any request for help is instantly answered. This is a lasting contribution to the fabric of this historic school’s achievements. He is truly one of a kind.”

As a mentor, Mr Jim Cooke has continued his support of the sciences at the school and recently played a role in the success of this years winning project of the 2012 BT Young Scientist Exhibition, which will be represented at the European Union Contest for Young Scientists in Bratislava in September. Upon his suggestion, Mark Kelly and Eric Doyle developed a project based on the Irish scientist Diarmuid Ó'Mathúna's 2008 solution to the “Euler Two Fixed Centres Problem”. A problem that has defeated a galaxy of famous mathematicians since it was first proposed in 1760.

Upon the receipt of his recognition of achievement, Mr. Jim Cooke expressed his gratitude stating, “over the many years at Synge Street, we created a very ambitious science curriculum in which the students have had to develop their capacity for critical thinking and creativity. Our success over the thirty years was immensely gratifying to all of us. The schools contribution to the development of science education and the enabling of pupils to discover a love for science, passion and enthusiasm for lifelong learning continues to be important for scientific research which underpins improvements in our human welfare, employment creation and economic development.”

The event was attended by a wide community of scientists, science teachers and students celebrating the inspirational roles of teachers in science and their vision to advance student learning and achievement.