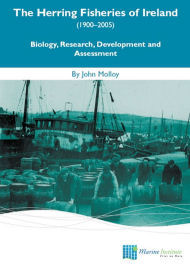 A new book – “The Herring Fisheries of Ireland (1900-2005)” by well-known fisheries scientist John Molloy is now available online from the Marine Institute e-store and describes the biology, research, development and assessment of the Irish herring fisheries over the past hundred years.

John Molloy retired from the Marine Institute in 2002 and was encouraged to commit his knowledge and experience to paper. His first book on the Irish mackerel fisheries was published in 2004.   The herring fisheries throughout Europe have played a very significant role in the economic development of many maritime countries including Norway, Iceland, Denmark, Netherlands, UK  and Ireland.

Author John Molloy and leading fisheries industry figure Joey Murrin at the launch of the book in Killybegs, Co. Donegal.

In the 17th century the Dutch and English fleets fought battles in the North Sea over the rights to fish the herring shoals. In Ireland, many rural communities, particularly those along the more remote regions of the west and northwest coast, were greatly dependent on herring as food.  Herring and potatoes were considered a staple diet and small farmers never considered themselves adequately prepared for winter unless they had a few barrels of salted herring stored away.

While much of the information presented in the book deals with the period 1960 to 2005, key developments that occurred from 1900 to 1960 are also discussed.   The development of the herring fisheries is influenced by the state of the stocks with low stocks resulting in low quotas, closure of fisheries and conflict between industry, scientists and managers.

Much of the book deals with the history of scientific stock assessments and advice given by the International Council; for the Exploration of the Seas (ICES).  John Molloy takes us on a personal journey through his scientific work on herring.   He talks of the real tears of frustration he shed in 1982, when he could not convince his fellow scientists that the criteria they were using to keep the Celtic Sea fishery closed were neither appropriate nor justified.

The book will be of interest to anyone who has ever been in any way connected with Irish herring fisheries, including managers, fishermen, students and fisheries scientists.   It may also prove useful in explaining the background to some of the issues that are still contentious today.

It is available from the Marine Institute e-store on www.marine.ie price € 32.00 including postage and packing.