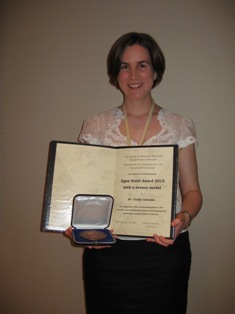 Dr. Ulrike Grienke, a postdoctoral researcher based at NUI Galway and a participant in the Teagasc led NutraMara functional foods research programme recently received the prestigious Egon Stahl-Award at a ceremony held in New York. This biennial prize is awarded by the Society for Medicinal Plant and Natural Product Research to an outstanding young scientist.

Dr. Grienke was presented with the award by Prof. Dr. Wolfgang Blaschek, the president of the General Assembly of the Society, during the International Congress on Natural Products Research (July 28th – August 1st, 2012), the largest natural product research meeting ever held in the United States, attended by 1,200 participants. After the award ceremony, Dr. Grienke gave a lecture on the scientific work accomplished during her PhD studies under the supervision of Prof. Judith M. Rollinger at the University of Innsbruck, Austria, which she completed in 2011.

Donated by Professor Egon Stahl (1924-1986) the award is given to young scholars to acknowledge the outstanding quality of their PhD thesis in the field of natural products, and to promote their early career. Prof. Stahl is one of the founders of modern phytochemistry and his work on thin layer chromatography (TLC) remains of fundamental importance.

Dr Grienke joined Professor Deniz Tasdemir’s research group at NUI Galway in December, 2011 and works on the isolation of bioactioves from shellfish as part of the NutraMara programme.

NutraMara is funded by the Department of Agriculture Food and Marine, and the Marine Institute and is led by the Teagasc National Food Research Centre. The programme aims to mine marine resources including seaweeds, aquaculture, microalgae and marine processing by-products for functional food ingredients.

The Marine Institute would like to congratulations Ulrike on her achievement and wishes her the best of success in her future career.