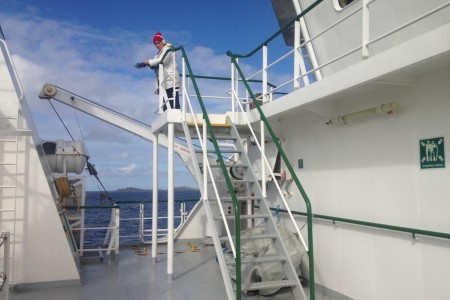 Robertina Šebjanič, a Slovenian artist based in Ljubljana, is one of seven international artists taking part in Aerial/Sparks, a Galway 2020 project by artist Louise Manifold taking place in collaboration with the Marine Institute. Aerial/Sparks explores connections between the ocean wilderness, marine science and radio communication, and how art might contribute to current scientific debates. The commissioned artists will create compelling stand-alone art works for radio broadcast in Ireland and Europe in 2020.

Robertina joined scientists on the Marine Institute's RV Celtic Explorer for a 15-day research voyage in the shelf seas around the north coast of Ireland as part of the Backscatter and Biodiversity on Shelf Sea Habitats (BaBioSSH) Survey. Led by Dr. Chris McGonigle of Ulster University with a team of multidisciplinary scientists from institutions across the UK and Northern Ireland, the survey focused on the use of emerging and novel technologies to improve knowledge of species diversity in marine ecosystems, particularly in marine protected areas and special areas of conservation. The survey included the deployment of Baited Remote Underwater Video Cameras at sampling sites, and collecting video footage using the Marine Institute's ROV Holland 1. 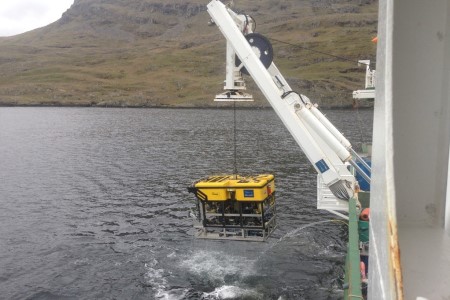 For Robertina, she didn't think twice when she was invited to be part of Aerial/Sparks as she admits, "I'm just obsessed with bodies of waters, oceans, seas, rivers, everything that is water-related." Robertina's research-based artworks are predominantly concerned with the cultural, (bio)political and ecological realities of human imprint on the aquatic environment, its consequences and challenges.

"In my work in general, I combine arts and science, and technology also. What I think is very important to bring out, especially in these kinds of art-science combinations, is that the artistic part is not just an interpretation of scientific data, we're not simply illustrating what we're getting, but we are trying to bring together the artistic philosophy also," Robertina said.

This is Robertina's first time on a research vessel on seas bordering the Northern Atlantic, and the longest time she has spent at sea. She was particularly keen to join the BaBioSSH survey because some of the research merged with her own areas of interests, including the study of sediment communities and the use of the latest sonar technology to map the seabed. Robertina felt it was important to approach the residency without preconceived aims and to be open to the new knowledge, experiences and sounds that would be coming her way: "It's like scientific research, you know what you are looking for but you don't know what the result will be. And it's the same with art also. If you have a particular idea, you block yourself to everything new that you will experience." 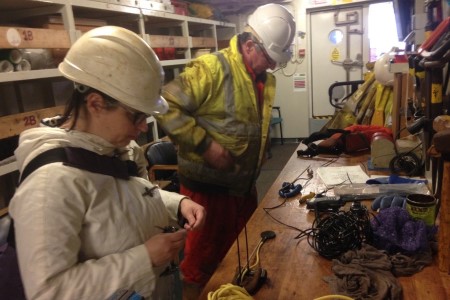 The survey employed non-invasive remote sensory technology to gain a better understanding of species diversity which has given Robertina a new perspective on aquatic life: "I'm grateful to the science team for letting me be part of this work. I have had the amazing opportunity to 'see and hear' deeper - to the seabed and marine life that is there through remote sensory technology such as the Multibeam EchoSounder (MBES), drop down video cameras and the ROV Holland 1 (remotely operated underwater vehicle)."

During her residency, Robertina spent the days recording sounds, reading, writing, watching basking sharks, gannets, seagulls, and the jellyfish encountered on the surface of the ocean. She found the survey team, which included engineers, the drivers of the ROV Holland I and a marine technician from 2G Robotics, both supportive of her work and great company. She in turn helped with water filtering for future analysis in the lab and investigated water samples.

Following the residency, Robertina is taking time to reflect on her research and exploring the possibilities of building a collaboration with the scientists from Ulster University.

Kate Howard, Cultural Producer of the Aerial/Sparks project for Galway 2020, remarked: "The Aerial/Sparks project created by artist Louise Manifold is using the medium of radio to explore ocean landscapes. Having renowned artists such as Robertina begin their residencies on the vessel is a significant step in the development of this project. We are excited to see the outcomes of these residencies and ultimately the series of acoustic projects that will be produced next year."

To learn more about the research undertaken as part of the BaBioSSH survey visit https://scientistsatsea.blogspot.com/

Robertina Šebjanič is a Slovenian artist based in Ljubljana. Her art-research focus for the last several years has been on cultural, (bio)political, chemical and biological realities of aquatic environments, which serves as a starting point to investigate and tackle philosophical questions on the intersection of art, technology and science. Her ideas and concepts are often realized in collaboration with others, through interdisciplinary and informal integration in her work.

Šebjanič is a member of Hackteria Network and Theremidi Orchestra. She was awarded Honorary Mention at the Prix Ars Electronica 2016, and has been nominated for the STARTS Prize 2016 and the White Aphroid Award. She was the SHAPE platform 2017 artist and a resident artist at Ars Electronica (EMARE / EMAP) in 2018.

Created by artist Louise Manifold for Galway's European Capital of Culture programme, Aerial/Sparks is an interdisciplinary art collaboration with the Marine Institute that explores radio connectivity and its relationship to ocean space.

As part of the project, European artists are developing work based on their experience of time spent at sea with the Marine Institute's research vessel RV Celtic Explorer, one of the few marine research vessels with sonic capabilities. The commissioned artists will create compelling stand-alone art works for radio broadcast in Ireland and Europe.

Aerial/Sparks is funded by the Galway European Capital of Culture 2020 programme and previously received funding through an Arts Council of Ireland Project Award 2017.