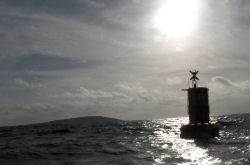 A series of yellow floating buoys - the first elements of a revolutionary new environmental monitoring system called SmartBay – were installed this week (Monday 14th July) in Galway Bay. The network is being developed by the Marine Institute as the first phase of a unique environmental test and demonstration platform.

The system is being developed in collaboration with the Environmental Protection Agency (EPA), Enterprise Ireland, the third level sector and other agencies. SmartBay will be a test-bed for the development of new environmental technologies and services and will involve a growing series of partnerships with Irish and overseas industries. In the first phase computer giant IBM will collaborate with the Marine Institute in developing new ways to collect, process and deliver environmental information.

Each SmartBay buoy supports an array of advanced ocean sensors to collect and transmit real time information on ocean conditions that will benefit scientists, commercial fishermen, fish farmers, environmental monitoring agencies and the general public. They were developed for the Marine Institute by the award-winning Dublin based company TechWorks Marine and complement the existing network of weather buoys, moored further offshore at six locations around the coast. The information the new bouys provide, which previously could only be collected by going to sea, will be beamed by radio to the Marine Institute’s headquarters at Oranmore. There it will be analysed and used to guide coastal zone management plans, advice for commercial fishermen, fish farmers and water users of all kinds.

“The beauty of SmartBay is that, for the first time in history, we can monitor a wide range of ocean conditions on a twenty-four hour basis from the screen of a laptop computer,” said James Ryan, who supervised the placement of the SmartBay system last week for the Marine Institute. “This opens up a wide range of possibilities for early warning systems for pollution, the study of fish and shellfish stocks, the prediction of harmful algal blooms, dangerously high waves and even the long term shifts in ocean conditions that may be induced by global climate change. It really is a revolution in ocean science and we’re extremely proud that Galway Bay, which is the home of the Marine Institute, has been selected as the pioneer site for this revolutionary technology.”

SmartBay is also the test bed for a much more ambitious project to extend these  systems out over Ireland’s continental shelf and down into the sunless depths of the abyssal ocean plain some three and a half kilometres below the surface.

Plans between the Marine Institute and IBM also include a scheme to incorporate the information collected by SmartBay into web-based lesson plans for schools in the Galway area, offering them a unique window into the underwater world.

(all photos by James Ryan, Marine Institute unless otherwise stated)