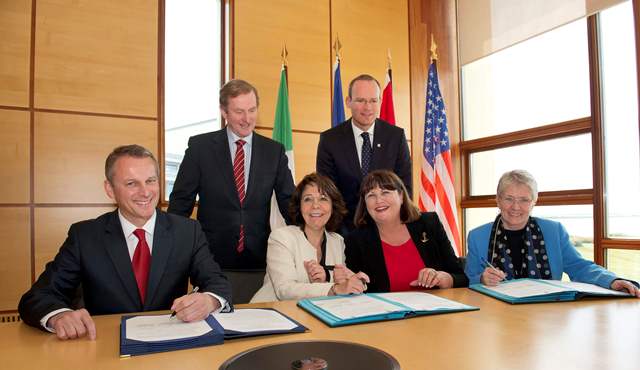 The European Union, The United States and Canada today agreed to join forces on Atlantic Ocean Research. The goal is to better understand the Atlantic Ocean and promote the sustainable management of its resources. The Agreement aims to connect the ocean observation efforts of the three partners. The work will also study the interplay of the Atlantic Ocean with the Arctic Ocean, particularly in relation to climate change. The EU and its Member States alone invest nearly two billion euro on marine and maritime research each year. The 'Galway Statement on Atlantic Ocean Cooperation' was signed today at a high level conference at the Irish Marine Institute in Galway.

European Commissioner for Research, Innovation and Science, Máire Geoghegan-Quinn, said: "The enormous economic potential of the Atlantic remains largely untapped. We probably know more about the surface of the Moon and Mars than we do about the deep sea floor. This alliance can make a big contribution to meeting challenges such as climate change and food security."

European Commissioner for Maritime Affairs and Fisheries, Maria Damanaki, said: "Today's agreement fully supports the Maritime Strategy for the Atlantic we put forward this month. While the initiative is of particular interest for the EU's five Atlantic states, it is open to researchers from all over Europe and beyond. The knowledge gained will be of benefit to all." The agreement recognises that Atlantic research will in many areas be more effective if coordinated on a transatlantic basis.  Areas for potential collaboration under the agreement include: an Atlantic Ocean observation and forecasting system; mapping critical areas of the Atlantic seafloor; identifying and recommending future research and ocean literacy and awareness initiatives.

Taoiseach, Mr. Enda Kenny, T.D., said:  “Today marks a new political and policy awareness of the ocean’s potential to create sustainable jobs and growth. Such awareness also provides broader societal benefits of understanding major environmental changes and associated risks. It was a major priority of the Irish Presidency to support the achievement of an Atlantic Ocean research alliance and I welcome the signing of the Galway Statement by the European Commission, the United States and Canada here at the Marine Institute today. The delivery of a Maritime Strategy for the Atlantic was also a priority of Ireland and I congratulate all those involved in the launch of the Action Plan to revitalise the marine and maritime economy in the Atlantic Ocean Area.”

The Atlantic Action Plan aims to show how the EU's Atlantic Member States, their regions and the Commission can help create sustainable growth in coastal regions and drive forward the "blue economy", which has the potential to provide 7 million jobs in Europe by 2020.

Mr. Simon Coveney, T.D., Minister for Agriculture, Food and the Marine said: “Ireland has a significant role to play in the implementation of the Atlantic Area Action plan and will also derive many benefits from it. The Government’s ‘Integrated Marine Plan for Ireland – Harnessing Our Ocean Wealth’ is rooted in the role the oceans can play in our economic recovery with a goal of  significantly increasing the turnover of Ireland’s “Blue Economy” to over €6.4Billion by 2020 and doubling the GDP contribution by 2030 (to 2.4%).”