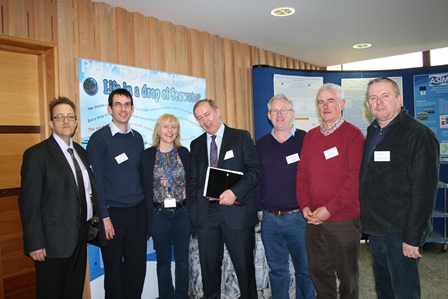 The 10th Shellfish Safety Workshop at the Marine Institute was attended by 140 participants including shellfish producers, processors, scientists and industry regulators to hear the latest advances in shellfish safety, including the discovery of an organism that causes harmful AZP toxins in shellfish as well as the use of satellite imagery and models to provide early warnings to fish farmers on harmful algal blooms and shellfish toxicity.

The workshop hosted by the Marine Institute, the Food Safety Authority of Ireland and the Sea Fisheries Protection Authority provided an opportunity to exchange information on the latest progress and research into the cause and control of shellfish toxicity and microbiological contamination of various shellfish products harvested and farmed around our coast.

Mr Richie Flynn of the Irish Shellfish Association said the huge effort and advances that have been made in understanding the nature of these issues are fundamental to consumer confidence and the development of the industry. He went on to say “these biotoxin and microbiological monitoring programmes that we spent many years developing are now carried out very efficiently, and with the full support of the industry. Both farmers and the state have to remain vigilant and maintain awareness of the need to promote our success and invest in the most advanced analytical and communication technologies to provide the best available advice to industry and highest standards of consumer protection.”

Dr Peter Heffernan, CEO Marine Institute said “Ireland has among the highest standards in shellfish safety worldwide because of the strict monitoring and control programmes in place here. Our scientists have led the way in the move to chemical testing for biotoxins and the development of molecular testing methods for shellfish viruses in recent years and this is now the standard across Europe.”

Among the research presented at the workshop was the discovery of the organism that causes Azaspiracid, a group of naturally occurring marine toxins that can contaminate mussels. The shellfish industry was affected by this particularly in 2005 and 2012 with significant closures of shellfish production areas. The ASTOX project, which is nearing completion, was presented by Jane Kilcoyne, Conor Duffy and Rafael Salas, who gave updated information on the toxicology of the Azaspiracid group of toxins, the discovery of the causative organism responsible for Azaspiracid shellfish poisoning and how this toxin behaves in the human digestive system and studies on how it affects various tissues.

Trends in shellfish toxins and toxic phytoplankton over the last four years were presented by Dave Clarke and Tara Chamberlain who both identified the extended occurrence of Azaspiracid in shellfish and red tides of the fish killing micro-algae “Karenia mikimotoi” of 2012 as being some of the worst we have seen.

Other research presented included a talk on shellfish hatchery technology by Iarfhlaith Connellan from Cartron Point Shellfish hatchery on Galway Bay on the production of triploid oysters to meet the demands of the Irish industry for oyster seed.  Teresa Morrissey, Marine Institute presented the findings of a study to assess the presence and impact of oyster disease which caused oyster mortalities in several areas in recent years.

Bill Dore, John Flannery and Paulina Rajko-Nenow from the Marine Institute discussed the   monitoring and detection of high levels of Norovirus contamination which is likely to be legislated for in shellfish in the future.

Dr. Georgina McDermott and Karen Creed from the EPA described measures introduced to reduce pressures and risks on the quality of shellfish, such as designated shellfish growing areas and pollution reduction programmes, and presented results showing certain areas are already improving in terms of eutrophication.

Conference organiser, Joe Silke from the Marine Institute,  welcomed the strong attendance at the workshop. ”Interest in these monitoring programmes and research activities from members of the industry is vital to ensure that the scientists and regulators are aware of relevant current and emerging issues”. He said that the efforts made in controlling outbreaks, and research into understanding and forecasting them can only be successful in a clean and unpolluted environment, and recognised the huge efforts being made by the EPA in reducing and monitoring pollution.  He thanked the other agencies including SFPA, FSAI and BIM in working together with the Marine Institute and the Irish Shellfish Association as a superb example of inter agency cooperation to deliver a set of programmes that are effective and efficient in reducing any risks associated with placing shellfish on the market.