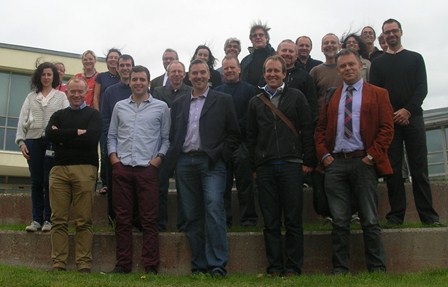 The Marine Institute has headed a major international project demonstrating the latest advances in shellfish safety. Results of this four year project presented on the 10th September at the ASTOX-II Project workshop in the Oranmore HQ of the Marine Institute were described as very significant for the shellfish industry and reinforced the Institute as a key research centre in the field of marine biotoxin science.

New discoveries made during the project regarding the biological source, chemistry and toxicology of a naturally occurring marine biotoxin ‘Azaspiracid’ will lead to a better understanding and regulation of the problem. This toxin is regulated under EU law and can accumulate in shellfish resulting in closures of shellfish production areas in order to prevent human illness. Irish scientists have worked on understanding the nature and origin of this toxin since it was first discovered on the west coast of Ireland in the mid 1990s.

An international group of over 40 scientists attending the workshop described several practical tools which have been developed for the analysis of this toxin and its micro algal source. This group of world leaders in the field of biotoxin science described several new phytoplankton species which are responsible for producing the toxins, developed new molecular probes and other assays for monitoring the problem and for the first time produced details of how the toxin affects consumers during and following digestion. These answers are essential in setting appropriate shellfish safety standards to ensure that only the highest quality Irish shellfish reach the market. Another major output of the project was the purification of several Azaspiracid variants directly from Irish shellfish and micro algae for use as certified reference materials. These ultra pure extracts are essential for analytical techniques and are now distributed to monitoring and research labs all over the world.

“The success of this project is very important for food safety in Ireland and internationally but also for the Irish shellfish Industry” according to project manager Jane Kilcoyne, Marine Institute. “When a bay is closed for shellfish production because of a harmful algal bloom it can cause severe economic hardship for producers in that area. We hope the practical tools developed through this project for example new rapid test methods will help to minimise the impact of these harmful toxins on shellfish producers by providing better prediction and monitoring systems.”

The ASTOX-II project team of Irish, Northern Irish, French, Norwegian, American, Canadian and German scientists worked together on biological, chemical and toxicological aspects of the compound. Since the project began it has generated many publications and others are anticipated after its completion in November 2013. It has resulted so far in three PhD studies, 29 peer-reviewed papers, three book chapters and 44 presentations at national and international conferences. These publications stimulate global interest in Azaspiracid research, disseminate new knowledge and reinforce Ireland’s position as a leading performer in marine toxins research. This knowledge continues to enable the development of national and international policy, which supports the development of Ireland’s seafood sector.

Speaking after the event, Marine Institute CEO Peter Heffernan congratulated the scientific team and said “This project has brought together a unique team of Irish and international scientists who are among the world leaders in their field of ocean environment biotoxin analyses and draw from the experience of leading marine and food safety organisations in the world whose combined efforts have significantly advanced scientific knowledge in this field.”

More information is available in the project brochure and leaflet.