Silver eels are the maturing adult eels that are migrating down the rivers and into the sea. They swim across the ocean to the Sargasso Sea to spawn. Silver eels typically migrate in the autumn using high flooded rivers on dark stormy nights to help them on their way down the river to the sea.

Silver eel have been monitored in Burrishoole since 1959. Trapping of the downstream migrating silver eels became possible following the construction of permanent upstream and downstream fish traps on the Mill Race. With the completion of the Salmon Leap Trap in 1970, full trapping facilities have been in place for over 40 years, the longest time series for mature European Eel, yielding a unique dataset on silver eel downstream migration, including daily counts, size, sex and migration patterns. 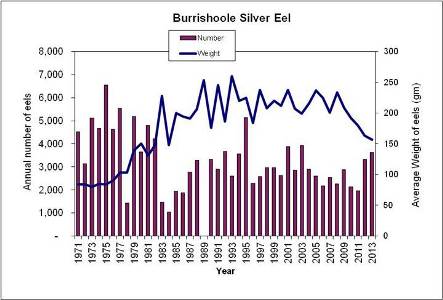 There has been a change in the sex ratio from 94% males in 1962 to 37.5% in 1988, so there are more females in the migration now compared to in the earlier years. A decrease in elver recruitment into freshwater and changes in the environmental status of the system are discussed as being possible reasons for these changes.