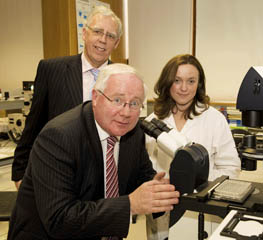 The Minister for Agriculture, Fisheries and Food, Brendan Smith TD and the Minister of State with Special Responsibility for Fisheries, Tony Killeen TD, today (Friday 22nd January) visited the Marine Institute in Oranmore, Co Galway to meet the Chairman of the Institute, Mr Jim Fennell; Chief Executive, Dr Peter Heffernan and other staff members of the Institute.

During the visit, Dr Heffernan made a presentation to the Ministers, which covered the Institute's roles and facilities as well as the impacts and benefits provided to the industry. The Ministers also had the opportunity to discuss particular aspects of the Institute's services, particularly in the areas of fisheries science, marine environment and food safety, ocean science and corporate services.

The Ministers were briefed on the Marine Institute's action-packed 2010 programme of scientific services and surveys ranging from fisheries, aquaculture, oceanography, marine environment and food safety services that are essential to the sustainability and competitiveness of the Irish Seafood Industry. They were further briefed on the strong progress being achieved by the NDP funded Sea Change National Research funding programme operated by the Marine Institute in areas as diverse as Marine functional foods, water sensor technology, socio-economics, biodiscovery and biotechnology all of which offer significant new economic activities for Ireland.

"The Irish marine research sector has been extremely successful in winning funding against stiff competition in Europe," said Minister Smith. "This funding is not only creating new jobs and supporting existing positions in research and industry, but also building new industries for the future."

The Minister complemented the Institute and its staff on the breadth and quality of their work and said that "the research undertaken and advice provided was very valuable and greatly appreciated both by the industry and the Government."

Minister Killeen highlighted the Institute's role as the implementing agency for Sea Change - A Marine Knowledge, Research & Innovation Strategy for Ireland 2007-2013. Minister Killeen said that "The Marine Institute has earned a high reputation and considerable international esteem both for itself and for Ireland, through its significant contributions to debates on EU and international marine science, its core scientific programmes and strategic planning initiatives."

Minister Killeen said that "the Institute is central to the progress made in developing national marine research programmes and infrastructure and on the Irish National Seabed Survey to map our 220 million acre marine resource and improved dialogue between scientists and fishermen to explore ways of ensuring that marine research contributes fully to creating a sustainable fishing industry."