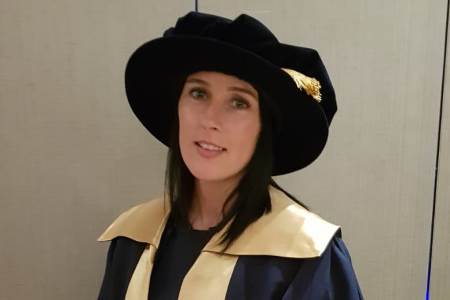 Research from Dr Katie Thomas of the Marine Institute has investigated the mechanisms for growth mark formation in scales of Atlantic salmon (Salmo salar Linnaeus) and the cause of variations in scale growth measurements.

The Atlantic salmon is native to the temperate and sub-Arctic regions of the North Atlantic Ocean, and utilises rivers for spawning and nursery, and the marine environment for adult feeding, development and rapid growth. Direct observation of the salmon's life is challenging and costly, so scales are widely used to assess and monitor changes in growth.

"The entire life history of an individual fish is recorded on a scale which begins to form during the fry stage of the lifecycle. As the scale develops, it lays down concentric ridges or rings called circuli, which look similar to rings on a tree. The number of circuli on a scale and the distances between each circuli are measured to provide a history of individual and population growth histories. These changes over time can be used to infer the salmons use of the ecosystem, and indicate whether changes in growth are apparent over time and between populations," Dr Thomas said.

Scale measurements are taken from a specific body location as recommended by the International Council for Exploration of the Seas (ICES) to standardise scale analysis globally. The first aim of Dr Thomas' research was to compare wild Atlantic salmon growth measurements from different body areas and to establish a calculation or a conversion that could be applied to match the measurements from the standard sampling location.

"Because scales do not form at the same time, the size and shapes of scales can look very different to each other. The next part of my research was to take size and shape measurements from scales across the body and produce a calculation that determines where on the body a scale may have originated," Dr Thomas further said.

Overall salmon survival during the marine phase is strongly linked to the post-smolt growth period, which is the scale growth from when a young salmon migrates to sea up to the first winter at sea. It is widely believed that circuli form on the scale every 7 days during the summer and every 14 days during the winter and also the wider the distance between the circuli, the better overall growth is. As this had never been experimentally validated before, the next aim of the research was to undertake experiments in the Institute of Marine Research laboratory (Matre) in Norway.

Dr Thomas explained, "Results from the experiments showed that circuli formation rates are not constant but ranged between 4 to 18 days. In addition, the spacing between the circuli did not reflect growth rate suggesting that wide spacing between each circuli was not necessarily an indication of good growth."

In the last stage of the research, scales from Atlantic salmon collected from three Irish rivers, Burrishoole, Moy and Shannon, between 1954 and 2008 were analysed to determine if marine growth had changed during that period.

The research showed that post-smolt scale growth declined over the decades corresponding to declines in return rates of Atlantic salmon but the change in growth was not consistent between the different rivers. This highlighted that the trends observed in one national index river may not be representative of change across all Irish populations and that more than one index river should be used to investigate survival rates in our salmon populations.

The new knowledge generated from the PhD thesis supports more accurate interpretation of scale growth measurements, furthers our understanding of the factors affecting the survival of the wild Irish salmon and ultimately benefits the future management of this iconic species.

Dr Niall Ó Maoiléidigh of the Marine Institute said, "Dr Thomas' research feeds directly into the Institute's long term monitoring and stock assessment programme for Irish salmon stocks and the ongoing programme of research in the Burrishoole national index river initiated in the 1960s. These results are helping unravel the complicated links between climate change and factors which are causing persistent declines in salmon returns to rivers, not just in Ireland, but in countries on both sides of the Atlantic where salmon occur."