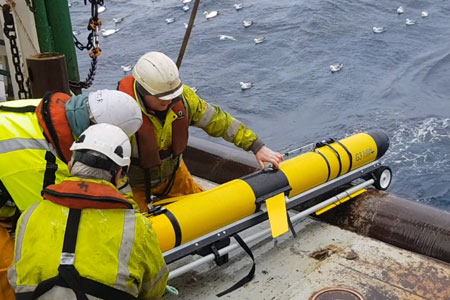 3 August 2021: The ability to track free swimming salmon juveniles has been extended hundreds of kilometres into the open ocean using advanced robotic technology. As part of the EU INTERREG VA-funded SeaMonitor project, Dr Ross O'Neill, Marine Institute and Kieran Adlum, P&O Maritime, tested a remotely operated "ocean glider", equipped with an acoustic tag detector along the steeply sloping area of the shelf edge approximately 130km north-west of the Scottish Hebrides. The ocean glider was deployed from the RV Celtic Explorer on 16th April during the 2021 Irish Anglerfish and Megrim Survey. During its two-month mission, the glider successfully detected four individual juvenile salmon smolts measuring only 15 to 19cm, nearly 600 km from their home rivers in Ireland, Northern Ireland and Scotland.

These fish had been tagged between four and six weeks previously with electronic acoustic transmitting tags along with hundreds of other juvenile salmon as part of the SeaMonitor project but also as part of the West Coast Tracking Project, a partnership between the Atlantic Salmon Trust, Fisheries Management Scotland and Marine Scotland, EU INTERREG VA-funded COMPASS project and Agri-Food Biosciences Institute (AFBI) research initiatives. One of the main aims of these projects is to investigate the persistent low marine survival of Atlantic salmon in the early stages of their oceanic migration to feeding grounds in the North Atlantic.

The four fish originated from the River Burrishoole in Co Mayo Ireland, the River Bann in Northern Ireland and the Rivers Clyde and Awe in Scotland.

Up to now, most tracking studies had been limited to estuarine or coastal areas due to technology limitations and the need for stationary receivers.

According to Dr Niall Ó Maoiléidigh of the Marine Institute and Principal Investigator for the SeaMonitor Project, "The detection of these fish confirms the importance of the shelf edge in this amazing journey, as the faster currents associated with the steep slopes most likely act as an aquatic transport system facilitating the northward migration of these tiny fish through a very harsh environment."

Prof Colin Adams University of Glasgow and Principal Investigator for the SeaMonitor Project said, "This study shows that tracking salmon over considerable distances at sea can be achieved which is crucial for research into highly migratory marine species especially where mortality may be occurring far from the shore."

Dr Ciaran Kelly, Director of Fisheries Ecosystems and Advisory Services at the Marine Institute said, "The use of the glider to track the movements of even very small fish has been clearly demonstrated and this will encourage the use of autonomous underwater vehicles to improve information on many marine species of animals which may be endangered or threatened without interfering with their natural migrations."

Sharon McMahon, Loughs Agency CEO said, "with funding from the EU's INTERREG VA Programme, the SeaMonitor project led by Loughs Agency, is breaking the boundaries of research into the marine migration journey of the iconic Atlantic Salmon. This innovative research will help to identify migratory routes and factors influencing salmon survival at sea, providing data to inform future research and decision making".

Underlining the importance of the project Gina McIntyre, Chief Executive of the Special EU Programmes Body said: "Our shared marine environment is under threat with many species, such as Atlantic Salmon being endangered. The research that is funded by the INTERREG VA Programme, is being undertaken by the SeaMonitor project, and will provide invaluable data that can be used to gain a better understanding of the migratory patterns of Atlantic Salmon and what is potentially disrupting them. This research will inform future environmental protection efforts, on both sides of the border, and is a testament to the partnership-based approach which underpins the INTERREG VA Programme."

This result represents a huge input by many participating institutions and organisations in organising and tagging salmon juveniles (smolts) as they leave their natal rivers to migrate to oceanic feeding grounds to deployment and successful piloting of the ocean glider. 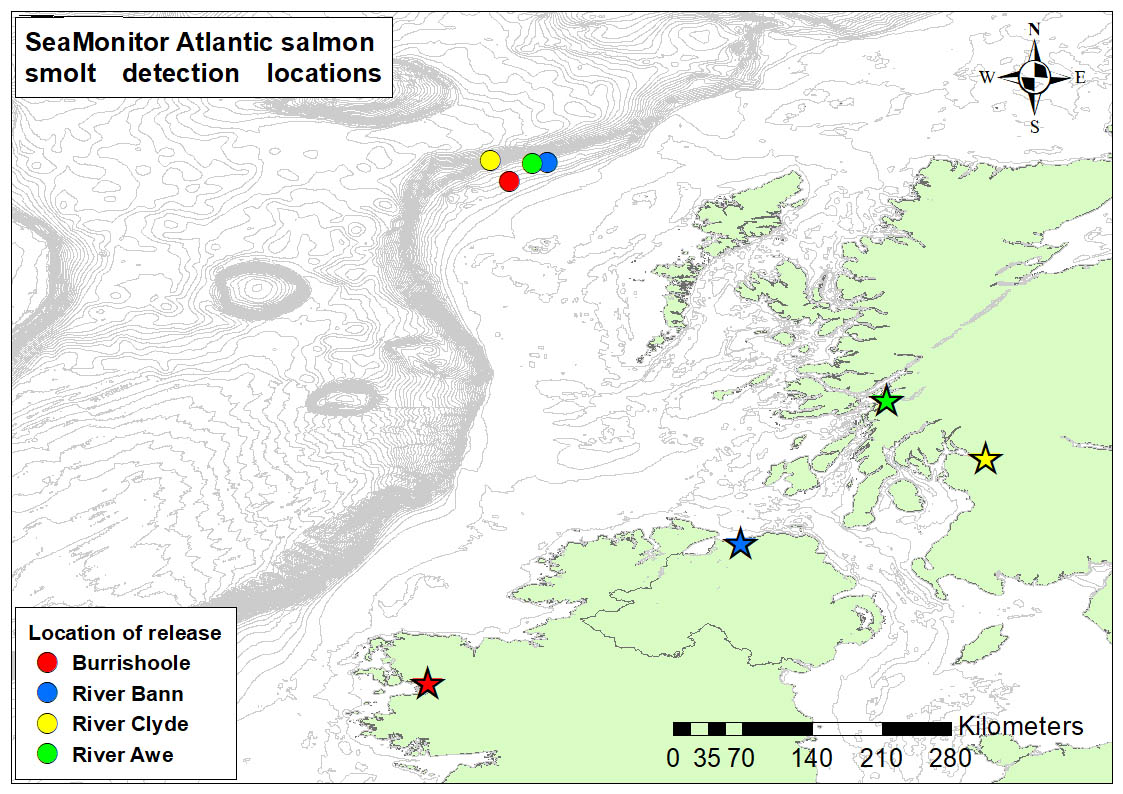 The active tracking technology allowing the detection of marine species is constantly evolving and while techniques have also been used in Canada and the USA, this is the first time it has been applied to Atlantic salmon in Europe. The glider is part of the SeaMonitor integrated cross-jurisdiction major network of acoustic receivers, robotic underwater vehicles, satellite tracking and passive acoustic receivers in European waters and its use will be extended to track cetaceans, basking shark and skates as well as to collect physical oceanographic data. When combined, the data will enable a holistic view of the regions mobile marine species and will prove invaluable to the regions managers, as well as establishing an integrated network of marine receivers for future applications and extended monitoring.

Match-funding for the project has been provided by the Dept. of Agriculture, Environment & Rural Affairs in Northern Ireland and the Department of Housing, Local Government and Heritage in Ireland.

For more information about the project visit: www.loughs-agency.org/seamonitor or follow the project on Twitter (@SeaMonitor1). SeaMonitor is a project supported by the European Union's INTERREG VA Programme, managed by the Special EU Programmes Body (SEUPB).

Notes for Editors:
An ocean glider is an autonomous, unmanned underwater vehicle which require little or no human assistance once deployed but which can be remotely piloted if necessary during their missions. These underwater "robots" can collect data in remote and harsh environments, safely and at relatively low cost. Gliders are usually equipped with a wide range of sensors to monitor temperature, salinity, currents, and other ocean conditions. They can also be used to carry receiving devices for detecting electronic transmitting tags which have been placed on fish, marine mammals and other marine animals enabling detection of these species in the deeper oceans where conventional receiving devices from ships or moorings may not be possible.

The SeaMonitor Partnership includes:
1. Loughs Agency (Lead Partner)
An agency of the Foyle, Carlingford and Irish Lights Commission (FCILC), established as one of the cross-border bodies under the 1998 Good Friday Agreement between the UK and Ireland. The Agency aims to provide sustainable social, economic and environmental benefits through the effective conservation, management, promotion and development of the fisheries and marine resources of the Foyle and Carlingford Areas. In its role as lead partner the Agency will co-ordinate the delivery of the five species models and the three management plans. The Agency will also lead in the salmon fieldwork and research for the River and Lough Foyle area. www.loughs-agency.org

2. Marine Institute
The Marine Institute is the Irish national agency for marine research, technology, development and innovation, promoting sustainable development of marine resources. The Institute's main role in SeaMonitor is to provide technical support for the deployment and maintenance of acoustic receivers and other monitoring equipment, data acquisition and data analyses. The Marine Institute will contribute towards the objective of strengthening current information and filling in crucial information gaps on specific areas and habitats of interest across jurisdictions and identify the relative importance of these habitats at the different stages of migration of highly mobile marine species. www.marine.ie

4. Agri-Food and Biosciences Institute (AFBI)
AFBI carries out high technology R&D, statutory, analytical & diagnostic testing and consultancy work for government and commercial companies globally. Fisheries and Aquatic Ecosystems Branch provides research, monitoring and technology transfer in support of evidence-based sustainable management of freshwater fisheries and marine resources in Northern Ireland. AFBI is a Non-Departmental Public Body sponsored by the Department of Agriculture, Environment and Rural Affairs. AFBI's main role in SeaMonitor will be to lead on the salmon fieldwork and research in the River Bush area of Northern Ireland. www.afbini.gov.uk

7. Galway-Mayo Institute of Technology
Founded in 1972 as the Regional Technical College in Galway, the Institute has expanded to five locations in the west of Ireland. The Marine and Freshwater Research Centre (MFRC) at the Institute is a dynamic group working to enhance the management of marine and freshwater ecosystems worldwide. As part of the SeaMonitor project the Institute will carry out acoustic monitoring for cetaceans www.gmit.ie

8. Ocean Tracking Network – Dalhousie University
OTN's mission is to inform the sustainable management and stewardship of aquatic animals by providing knowledge on their movements, habitats and survival in the face of changing global environments. As part of the SeaMonitor Project the OTN are providing invaluable technical advice, equipment and support in setting up and testing the array. www.oceantrackingnetwork.org

9. University of California Davis
UC Davis is a public institution, land-grant university and pioneer in interdisciplinary problem-solving. Its four colleges, five professional schools, more than 100 academic majors and 86 graduate programs make it the most comprehensive of all the University of California campuses. UC Davis is providing invaluable technical advice, equipment and research assistance in setting up and testing the array. www.ucdavis.edu

Special EU Programmes Body (SEUPB)
The SEUPB is a North/South Implementation Body sponsored by the Department of Finance in Northern Ireland and the Department of Public Expenditure and Reform in Ireland. It is responsible for manage two EU Structural Funds Programmes, PEACE IV and INTERREG VA which are designed to enhance cross-border co-operation, promote reconciliation and create a more peaceful and prosperous society.

The Programmes operate within a clearly defined area including Northern Ireland, the Border Region of Ireland and in the case of INTERREG VA, Western Scotland.
The INTERREG VA Programme has a value of €283 million and aims to address he economic and social problems which result from the existence of borders. For more information on the SEUPB, please visit www.seupb.eu 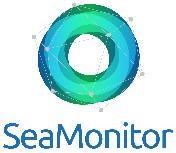