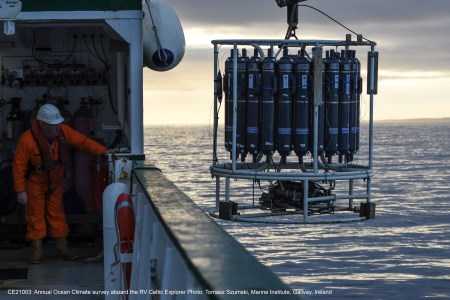 20 April 2021: Scientists from the Marine Institute, Maynooth University and the National University of Ireland Galway were recently aboard the RV Celtic Explorer, for a 14-day scientific survey studying the shelf and deep water off the west coast of Ireland. This Marine Institute's annual ocean climate survey has been running since 2006 and facilitates long-term physical and biogeochemical observations of the deep water environment in the South Rockall Trough.

The Rockall Trough is an important region that provides a pathway for the transport of heat and salt from the North East Atlantic to the Nordic Seas, where waters are subjected to phenomena such as deep convective mixing that creates cold dense water. Water exchange and interactions in the Rockall Trough play a fundamental part in the overall thermohaline circulation in the North East Atlantic; as large volumes of warm water pass through the Rockall Channel, before flowing into the Nordic Seas with a return of cold dense bottom water outflow spilling into the region. Changes in the region's water properties, such as temperature and salinity, vary on inter-annual and decadal time scales.

Chief Scientist on the research survey, Dr Caroline Cusack of the Marine Institute said, "Scientific data collected on this survey allows the assessment of inter-annual variability of physical and biogeochemical conditions that impact shelf and deep waters. This variability can have a range of impacts on ocean ecosystems, ocean circulation and weather patterns. The survey contributes to activities of the International Council for the Exploration of the Sea and provides support to the Convention for the protection of the marine environment of the North East Atlantic (OSPAR Convention), the Marine Strategy Framework Directive focused on protecting ocean health, and climate change assessments."

This year, Maynooth University scientists from the A4 project (Aigéin, Aeráid, agus athrú Atlantaigh = Oceans, Climate, and Atlantic Change) joined the survey to work with the Marine Institute oceanographic and climate services team. The A4 project, supported by Marine Institute funding, studies how changes in the Atlantic impact Ireland and north western Europe through changes in ocean circulation and sea level and is developing predictive capacity for these regions. Recent research by the A4 project found that the Gulf Stream System, also known as the Atlantic Meridional Overturning Circulation (AMOC), is at its weakest in over a millennium.

Scientists from the National University of Ireland, Galway were also on-board the RV Celtic Explorer working with Marine Institute chemists to collect supporting chemistry information. The NUI Galway scientists are currently working on the Marine Institute funded VOCAB project (Ocean Acidification and Biogeochemistry: Variability and Vulnerability) to enhance knowledge on the vulnerability of selected marine ecosystems in Irish waters to ocean acidification. NUI Galway scientists also collected samples relevant to the JPI Climate and JPI Oceans CE2COAST project which aims to downscale global climate models to regional and local scales to provide information on the impacts of climate change tailored to local needs.

Mick Gillooly, Director of Ocean Climate and Information Services at the Marine Institute said, "Collaborative oceanographic research is very important to help inform Ireland's response to climate change and underlines the importance of researching marine impacts of climate change, which could have a significant societal impact on Ireland. The Marine Institute's annual climate survey, with scientific experts from collaborating research groups, enables us to generate a long-term time series of key oceanographic data to further increase our knowledge about our changing ocean climate."

This year, 51 stations were occupied with 301 depths sampled. At each station, scientists profile the full water column and collect measurements of temperature, salinity and oxygen. Water samples are collected at targeted depths and analysed on board to determine the salinity, dissolved oxygen, inorganic nutrients and carbon content (DIC/TA). The RV Celtic Explorer's advanced underway data acquisition system gathers information on temperature, salinity, fluorescence, and pCO2 in surface waters. This year, the Marine Institute also had a laboratory on board equipped with state-of-the-art analysers, enabling near real-time reporting of nutrients, oxygen and salinity.

The annual ocean climate survey, supports a number of Marine Institute ocean observation programmes. The Irish Marine Data Buoy Observation Network, managed by the Marine Institute in collaboration with Met Éireann, is a network of five offshore weather observing marine buoys around Ireland. The M6 Data Buoy, located hundreds of kilometres to the west of Ireland in the South Rockall Trough, was a station sampled during this scientific survey.

A Marine Institute glider, an underwater autonomous vehicle, was also deployed near the M6 Data Buoy during this survey. The glider can reach depths of 1,000 metres and collects oceanographic data on conductivity, temperature, depth, fluorescence, turbidity and dissolved oxygen. Since its deployment, the glider has travelled more than 350 kilometres collecting additional oceanographic data for the scientists involved.

Scientists also deployed two Argo Floats, which measure temperature, salinity and depth with one Argo Float also taking measurements of the water oxygen content. Argo Floats are autonomous instruments that remain at sea for a period of three to five years which provide high quality temperature and salinity depth profiles while ascending and descending to and from the surface from a depth of 2,000 metres, as it drifts through the ocean. There are currently about 4,000 Argo Floats in the world's oceans. As part of Ireland's participation in the Euro-Argo ERIC Programme, the Marine Institute deploys three Argo Floats each year. The track and data from current Irish Argo Floats can be viewed at http://www.digitalocean.ie

The annual ocean climate survey, the A4 project and VOCAB (Ocean Acidification and Biogeochemistry: variability, trends and vulnerability) are supported by the Marine Institute under the Marine Research Programme funded by the Irish Government.