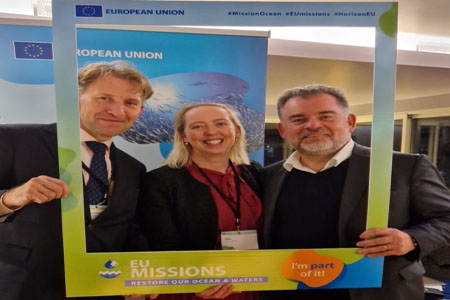 25th November 2022: President Michael D. Higgins was among the 160 guests at an event held in Cork on Friday to launch the European Union’s Mission to protect and restore ocean and inland waters in the Atlantic and Arctic regions by 2030. The National Maritime College of Ireland was the venue for the gathering which brought together Ministers and high-level representatives from Atlantic and Arctic countries, the Lord Mayors of Cork city and county and actors and stakeholders from government, academia, business and civil society.

The Mission to Restore our Ocean and Waters by 2030 is one of five such missions being funded and supported by the €97bn EU Horizon Europe Programme. But while research will be a key part of the mission, success will depend on action and buy-in from citizens, businesses and decision makers. According to Dr. John Bell, Director of Healthy Planet at the European Commission’s DG Research & Innovation directorate, which manages the Horizon Europe Programme, ‘we need to make peace with nature using all the means at our disposal using laws and programmes, science & innovation, and the will of the people to make things happen on the ground.”

The Mission is designed to deal with the severe threat to our ocean, coastal and inland waters that has been brought about by decades of pollution and human activity. At the Cork event, concrete measures and actions in the Atlantic-Arctic were highlighted to address the ambitious targets for the restoration of our ocean and seas by 2030, namely to:

Broad public mobilisation and engagement and a digital ocean and water knowledge system, known as Digital Twin Ocean, are cross-cutting enabling actions that will support these objectives.

In hosting this event, Ireland is hoping to lead the way in advancing the goals of the mission. Step one is to sign the Mission Charter, a commitment of intent that can be signed by any entity, from a small company to a university, a city council or a public authority.

Speaking at the event, Dr Paul Connolly, Chief Executive of the Marine Institute, said, “the mission Charter has been signed by the Marine Institute and the Mission is strongly supported by our Government. As a public organisation, the Marine Institute is committed to protect and restore biodiversity, prevent and eliminate pollution in our oceans and make the blue economy circular and carbon-neutral.”

The event in Cork marks the start of an accelerating programme of activities across the Atlantic and Arctic bordering countries and Europe that will be critical to deliver a healthier and more productive ocean upon which our current and future societies will depend.

Horizon Europe Missions are a new way to bring concrete solutions to some of our greatest challenges. They have ambitious goals and will deliver tangible results by 2030. The five Missions will deliver impact by putting research and innovation into a new role, combined with new forms of governance and collaboration, as well as by engaging and empowering citizens.

Missions are a novelty of the Horizon Europe Research and Innovation Framework Programme for 2021-2027. Four out of the five Missions will deliver on the European Green Deal; Restore our Ocean and Waters by 2030; Adaptation to Climate Change; 100 Climate-Neutral and Smart Cities by 2030; and A Soil Deal for Europe. The fifth Mission focuses on Cancer.

Horizon Europe Mission Restore our Ocean and Waters by 2030

The Horizon Europe Mission Restore our Ocean and Waters has set ambitious targets for the restoration of our ocean and seas by 2030:

Further details at: Restore our Ocean and Waters (europa.eu)

Mission Lighthouses are spaces of transformation to pilot, demonstrate, develop and deploy the Mission activities across the European Union. To reach these targets in the Atlantic and Arctic Ocean and to promote basin scale cooperation, the Atlantic-Arctic Lighthouse has an initial focus on protecting and restoring marine and freshwater ecosystems and biodiversity and boost coastal resilience.

The European Commission is now calling on a wide range of stakeholders, including public or private organisations, national/regional/local authorities (including cities and ports), philanthropists and investors, enterprises and businesses, civil society, research and academia to adhere to the Mission Charter by submitting actions for achieving the Mission objectives. The Charter is non-binding and any actions at European, transnational, national, regional/local level, promoted by public or private funds (including crowd funding), contributing to the Mission.