5 November 2021: This week, an international team of scientists demonstrated an advanced underwater technology for ocean observation at the SmartBay Observatory in Galway Bay.

The French company SEABER, demonstrated the YUCO micro-AUV, a micro Autonomous Underwater Vehicle, which is an unmanned, untethered vehicle that collects oceanographic data in coastal environments. This data is important for monitoring our marine environment and changing ocean climate.

The SmartBay Observatory is one of Ireland's national marine scientific research facilities, providing national and international researchers with the infrastructure to validate new marine sensors and instruments in real sea conditions.

Alan Berry, Manager of Marine Research Infrastructures at the Marine Institute said, "The SmartBay Observatory is used to validate new sensor technologies, such as SEABER's innovative and affordable micro AUV system. New marine sensor technologies increase the accessibility and availability of data for organisations monitoring our oceans and in turn contributes globally to our deeper understanding of the oceans."

SEABER were successful through the EU JERICO-RI European Infrastructure JERICO-S3 Access Programme to utilise the SmartBay Observatory in Galway Bay. Over the coming months, the SmartBay Observatory will facilitate a further four international science projects demonstrating novel and improved sensor technologies on this unique Irish research infrastructure towards the common goal of improving data collection for marine and climate observations. 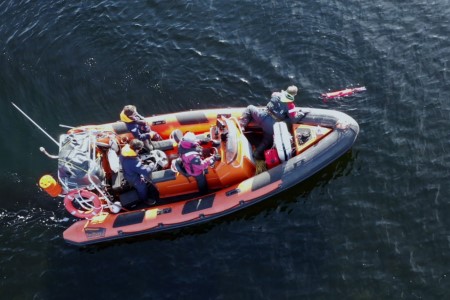 Luc Simon, Global Business Development Manager at SEABER said, "We were honoured and thrilled to be selected for the JERICO-RI European Infrastructure JERICO-S3 access programme. We were delighted to work with the Marine Institute and SmartBay team to showcase our YUCO micro-AUV system."

The SmartBay Observatory, established in 2015, is an important contribution by Ireland to the growing global network of real-time underwater observatories giving us new insights into the ocean.

Michael Gillooly, Interim CEO at the Marine Institute said, "By facilitating advanced ocean monitoring technologies, the SmartBay Observatory helps to take concepts and prototypes from laboratories into the sea. New marine monitoring technologies and sensors generate more data than we have ever had before, improving our ocean observation capabilities and increasing our ocean knowledge."

For more information about the JERICO-S3 access programme please view the project website at https://www.jerico-ri.eu. The JERICO-S3 project received funding from the European Commission's Horizon 2020 Research and Innovation programme under grant agreements No 871153.

A micro Autonomous Underwater Vehicle, the YUCO- AUV is an unmanned, untethered vehicle with a new conductivity, temperature and depth (CTD) sensor which is used to conduct underwater research. The YUCO-AUV micro design is 1 metre long, 10kg in weight and has up to 10 hours of autonomous battery life.

The main objective of the access period to Smartbay Observatory in Galway Bay is to showcase the capability and complementarity of the YUCO micro-AUV in providing spatially referenced qualitative salinity data in a real sea coastal environment with waves, currents and tides. These types of data sets are important for monitoring our marine environment.

The YUCO-AUV system integrates a Legato RBR CTD sensor which is ideally suited for autonomous underwater platforms and will provide accurate and calibrated dynamic temperature and salinity measurements together with the YUCO.

SEABER's YUCO micro-AUV system will be integrated with a INX© navigation system – Intuitive Navigation eXperience, combined with DVL - Doppler Velocity Logger. The full system will showcase YUCO's unique capability to perform expert navigation transects in a complex coastal environment without requiring external physical interventions. All of this will be performed using a small and affordable micro-AUV platform which will prove its readiness for market.

During the access period at SmartBay the YUCO will perform various missions in the Galway Bay such as:
- Measuring data around fixed observatories of the SmartBay Observatory
- Launch and recovery by multiple means (shore, small vessels, vessel deck)