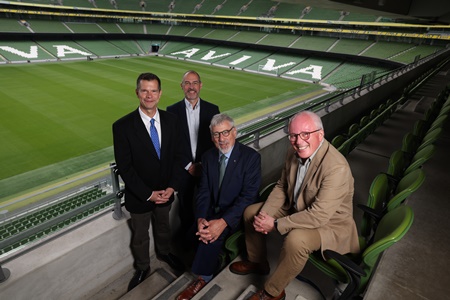 Monday, 19 September 2022: The Marine Institute is delighted to welcome the International Council for the Exploration of the Sea (ICES) ‘Annual Science Conference’(ASC) to Ireland. The ICES ASC is commencing today in the Aviva, Dublin and will run from 19-22 of September.

The ASC was cancelled in 2000 and was fully virtual in 2021.  This year’s event in Dublin will be a hybrid conference and the ICES network has the opportunity to meet in person for the first time since 2019. The organisers are expecting up to 500 in person attendees and another 200 joining virtually. This important date in the marine calendar provides opportunities for marine scientists from across the world to meet, present and discuss the latest science around supporting the sustainable use of our oceans.

Increasingly there is a greater focus on the importance of our oceans in addressing environmental and economic challenges both nationally and internationally and the ICES conference is a key marine milestone for Ireland. The Marine Institute provides broad range of dedicated marine scientists that make a valuable contribution to the leadership, advisory, scientific and data work of ICES. The conference speakers will focus attention on the ocean, on our increased marine science capacity and especially on the work that we do to provide robust science, data and advice for the sustainable use of our ocean space.

The conference will address many diverse and topical issues in marine science including spatial management of our ocean, climate change, biodiversity, extreme events, integration of fisher’s knowledge into marine management, sustainable aquaculture in a changing world, offshore renewable energy and engaging society in visions of our future.

The ICES ASC 2022 is supported by funding from the Government of Ireland and the European Union as part of the European Maritime, Fisheries and Aquaculture Fund (EMFAF) Operational Programme for 2021-2027. Ireland will be leading the opening keynote session today and the panel will be moderated by Dr Glenn Nolan, Head of Oceanographic and Climate Services at the Marine Institute. The session will examine the climate change impacts on North Atlantic/Irish waters and give the perspectives of four leading Irish marine scientists – Professor Dave Reid, Marine Institute; Eimear Manning, National Youth Council of Ireland; Dr Grace Cott, UCD and Dr Gerard McCarthy NUI Maynooth.  Temperature changes in the Atlantic, change in distribution of fish stocks, impacts on coastal habitats which store carbon and coastal communities, and their livelihoods will be the central focus of the session.

Dr Paul Connolly, CEO of the Marine Institute, speaking from the conference said: “We are delighted to welcome the ICES community to Ireland for what promises to be an engaging and timely conference. We face many challenges and will have to make decisions about our ocean that will have environmental, economic and social impact.  We need the best quality data, science and advice to inform these decisions. The conference provides opportunities for everyone, from students and early career scientists to senior scientists and leaders of research institutes, academia and other scientific organisations to network. Scientists will showcase their work and deepen our understanding on how we can both protect and harness the full potential of our oceans.”

Irish scientists are making valuable contributions to the conference agenda and showcasing their marine science across many diverse areas.

For further information or to arrange an interview with a Marine Institute spokesperson please contact:

The Marine Institute is the State agency responsible for marine research, technology development and innovation in Ireland. We provide scientific and technical advice to Government to help inform policy and to support the sustainable development of Ireland’s marine resource.

About ICES and the ICES Conference

The International Council for the Exploration of the Sea is often known as ICES and is an intergovernmental marine science organisation. Their goal is to advance and share scientific understanding of marine ecosystems and the services they provide. They use this knowledge to generate state-of-the-art advice for meeting conservation, management, and sustainability goals. This includes a network of nearly 6,000 scientists from over 700 marine institutes from 20 member countries and beyond.

The Annual Science Conference is an important gathering for the ICES community. It provides opportunities for marine scientists to present and discuss the latest science, develop new ideas and establish partnerships. The conference also provides opportunities for everyone, from students and early career scientists to senior scientists and leaders of research institutes, academia and other scientific organisations to network and showcase their work.

For further information on the conference and for the full conference programme visit: https://www.ices.dk/events/asc/ASC2022/Pages/default.aspx

Glenn is currently head of oceanographic and climate services at the Marine Institute in Galway. Previously Director of the European component of the Global Ocean Observing System (EuroGOOS) in Brussels. He has broad experience in national and European funded programmes (Interreg, Framework 7 and Horizon 2020) and in developing Ireland’s ocean observing and forecasting capability and funding for marine research and development over 25 years.

Gerard is an oceanographer working in ICARUS (Irish Climate Research and Analysis Unit) in the Department of Geography at Maynooth University, where he leads a team of seven oceanographers and climate scientists. His research interests are in Physical Oceanography, specialising in the Atlantic Meridional Overturning Circulation (AMOC), with particular interest in evolution of the AMOC in the 20th century. Since starting work in Maynooth in late 2017, he has worked on piecing together Ireland’s sea level change since the mid-19th century.
He leads the A4 project funded by the Marine Institute and is co-Investigator on EirOOS—an Irish ocean observing system. He currently leads a work package on the JPI Oceans and Climate project ROADMAP. He has been involved in a number of European Commission funded projects including the Thor, NACLIM, and Blue-Action.  Gerard previously worked at the National Oceanography Centre in Southampton, UK, where he worked with the RAPID team measuring the Atlantic Meridional Overturning Circulation.

Grace is an Assistant Professor in Plant Biology at University College Dublin, leader of the Blue Carbon research lab, and a Marie Curie alumna. Dr Cott’s research is focused on quantifying carbon stocks and sequestration rates and greenhouse gas emissions from saltmarsh habitats and coastal reed swamps and assessing plant and habitat responses to climate change. In 2014, Dr Cott undertook her Marie Curie Postdoctoral Fellowship at the Smithsonian Environmental Research Centre, Maryland USA working at the Global Change Research Wetland. In 2020, Dr Cott secured a Science Foundation Ireland Starting Investigator Grant to launch blue carbon research in Ireland. In total, she has secured €2.9 million in research funds to date. Dr Cott is a member of the Coastal Carbon Research Coordination Network and is lead-PI on a Marine Institute funded project focused on investigating Ireland’s blue carbon potential across saltmarsh, seagrass and near-shore habitats.

Eimear holds a Master of Science in environmental sustainability, where she focused on marine and freshwater environments. Based on her continued outreach of marine education and ocean literacy she was appointed as Ireland’s All-Atlantic Ocean Youth Ambassador from 2019-2020, and now continues as an All-Atlantic Ocean Youth Mentor. Throughout her interactions with a diverse range of communities during her ambassadorship, Eimear found an appreciation of the need for Climate Justice, particularly for communities that will be most negatively impacted by the effects of climate change. Eimear shifted her career focus from specifically marine and coastal communities to all marginalised communities that deserve a Just Transition. Eimear now works as the Climate Justice & Youth Development Officer at the National Youth Council of Ireland. Alongside her climate justice initiatives, she promotes the importance of youth inclusion and a youth-led approach, particularly in relation to policy that directly impacts current and future generations of young people. Eimear continues her environmental education workshops and seminars through her own company, TurnTides.org.

Prof. Reid has worked for 32 years in fisheries management on Fisheries sustainability, fishing capacity and effort, industry collaboration, as well as Integrated Ecosystem Assessment (IEA) and Ecological Risk Analysis (ERA). Dave started his career in fisheries at the Marine Lab Aberdeen (now Marine Scotland Science), and came to Ireland in 2009 to lead the Beaufort Ecosystem Approach to Fisheries Management project at the MI. He has a strong involvement with ICES, including chairing the Science Steering Group on IEA and many ICES expert groups. He has been involved in over 20 EU funded projects, in two cases as scientific coordinator. He has co-authored over 120 peer reviewed publications. He is Adjunct Professor at University College Cork, Ireland.